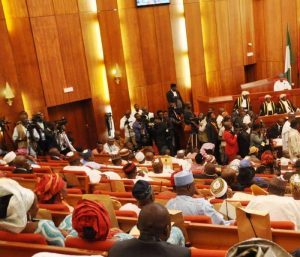 The Nigerian Senate has accused the Buhari administration of plotting to muzzle the legislature and criminalise legislative processes. The upper chamber said the plot was to cause a leadership change in the National Assembly.

The senate’s stance followed criminal charges of forgery slammed on Senate President Bukola Saraki and his deputy, Ike Ekweremadu, by the Federal Government.

“(This) is a return to the era of impunity and lack of respect for due process which we all fought to abolish,” the Senate said in a statement signed by its spokesperson, Aliyu Sabi, on Sunday.

Also charged alongside the two presiding officers are former Clerk to the National Assembly, Salisu Maikasu, and his deputy, Benedict Efeturi.

The four are accused of conspiracy and forgery of Senate Standing Rules that brought Messrs. Saraki and Ekweremadu to office last year.

The suit was filed on June 10, almost a year after Suleiman Hunkuyi, secretary of anti-Saraki Unity Forum, petitioned the Inspector General of Police, demanding criminal investigation into allegation of forgery of Senate Rules used for the elections of the presiding officers last year, June 9.

Earlier, in a statement, Mr. Ekweremadu stressed neither he nor Mr. Saraki was invited for interrogation by the Police or indicted in its July 2015 report to the Attorney-General of the Federation. He queried the basis for the fresh charges filed.

Read the full statement by the Senate:

1. After reading in the national newspapers and online platforms of the planned charges of forgery and conspiracy preferred against the Senate President, Dr. Abubakar Bukola Saraki, his Deputy, Senator Ike Ekweremadu, immediate past Clerk of the National Assembly, Alhaji Salisu Maikasuwa and the Clerk of the Senate, Mr. Ben Efeturi and reviewing the circumstances leading to the filing of these charges, we are compelled to alert the good people of Nigeria and the international community, that our democracy is in danger and that the attempt by the Executive Arm of the Federal Government to muzzle the legislature and criminalise legislative processes in order to cause leadership change in the National Assembly is a return to the era of impunity and lack of respect for due process which we all fought to abolish.

2. We urge President Muhammadu Buhari to please call his Attorney General and Minister of Justice, Mr. Abubakar Malami, to order. The Senate of the Federal Republic voted freely to elect its leadership into office and continuing attempts to change that leadership through the wanton abuse of judicial processes cannot stand in the eyes of the world. It is clear that the Attorney General and party leaders behind this action either lack the understanding of the underlining principles of constitutional democracy, the concept of Separation of Powers, checks and balances and parliamentary convention or they just simply do not care if the present democracy in the country survives or collapses in their blinded determination to get Saraki and Ekweremadu by all means necessary, including abuse of office and sacking the Constitution of the Federal Republic of Nigeria.

3. The Nigerian people have enough economic hardship at this time requiring the full attention and cooperation of the three arms of government, instead of these attempts to distract and politicise governance. We are in a state of economic emergency such that what the National Assembly needs at this time are executive bills and proposals aimed at resolving the crises of unemployment, currency depreciation, inflation, crime and insecurity. What the National Assembly needs now are executive bills to build and strengthen institutions to earn revenues, fight corruption and eliminate waste. Instead, we are getting hostile actions aimed at destabilising the National Assembly, distracting Senators from their oversight functions and ensuring good and accountable governance.

4. We must make it clear here to the individuals in the Executive arm and party leadership behind these plots not to mistake the maturity and hand of co-operation being extended to the Presidency by the legislature as a sign of weakness.

5. This latest plot is directed at forcing a change of leadership in the Senate or, in the extreme case, ground the Red Chamber of the National Assembly. Or how do one interpret a move in which the two presiding officers are being set up to be remanded in Kuje Prison or incapacitated from sitting at plenary through a day-to-day trial on a matter that is purely an internal affair of the Senate.

6. This obviously is a dangerous case of violation of the independence of the legislature, undue and unnecessary interference in the internal affairs of the Senate and blatant abuse of the judicial process. The matter now being criminalised was brought to the plenary of the Senate in session, over a year ago. And because it had no support, it was overruled and roundly defeated in chambers. To now take a matter that was resolved on the floor of the Senate to the police and then make it form the subject of a criminal prosecution of freely elected legislators beats all imagination of free thinking men all over the world. The implication is that any matter that fails on the floor of the National Assembly will now be taken to the Police, thereby endangering every Senator and House member. This current move clearly runs contrary to the Doctrine of Separation of Powers and Checks and Balances which are fundamental to the successful operation of the Presidential System of government. It runs counter to the principle outlined by the Supreme Court in the Adesanya Vs Senate case where it was held that nobody should seek to use the courts to achieve what he or she has failed to push through on the floor of the National Assembly.

7. This present efforts, therefore, is clearly a coup against the legislature with the ignoble aim to undermine its independence and subject the law making institution to the whims and caprices of the executive. It is a plan to return Nigeria to the dictatorial era which we have, as a nation, voted to reject. It is a dangerous trend with grave implications for the survival of our democracy and the integrity of the component institutions. This rule of men as against the rule of law is also the reason why the War Against Corruption, one of the cardinal objectives of the present administration, is losing credibility because people perceive it to be selective and, in most cases, aimed at settling political or partisan scores.

8. The Rules of the Senate and how the institution elects its leadership are internal affairs. The Rules of a new Senate are provided by the National Assembly bureaucracy. It has always been so since 1999. After the inauguration of the Senate, if Senators have objections to any part of the Rules, they can follow the procedure for changing it. Senators of the Eighth Senate have no control on the rules applied in the elections of June 9, 2015 because until after their inauguration, they were only Senators-elect, and therefore mere bystanders in the affairs of the Senate.

9. We therefore urge all Nigerians and the International Community to rise up and condemn this blatant attempt to subject the legislature to the control, whims and caprices of the executive. If the Legislative branch falls, democracy fails as there will be no other institution empowered by the Constitution to check and balance the enormous powers of the Executive branch. We also call on the judiciary as the last hope to save our constitutional democracy and stand up for the rule of law, by doing that which is right in this case.

4. We must make it clear here to the individuals in the Executive arm and party leadership behind these plots not to mistake the maturity and hand of co-operation being extended to the Presidency by the legislature as a sign of weakness. The National Assembly bent backwards to accommodate various infractions and inefficiencies in pursuit of inter-arms co-operation and national interest. We did not follow up the various infractions because we believe there are bigger issues which the government has to attend to in order to ensure that every Nigerian have food on his table and live comfortably in a secure environment. We know that the country is actually in a state of economic emergency and all hands must be on deck. -Premium Times