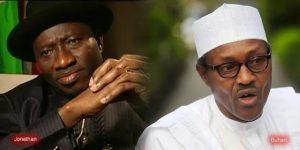 Former President Goodluck Jonathan yesterday defended his tenure, saying he fought corruption, but added that he is being investigated for graft by the Muhammadu Buhari administration.

In an interview with Bloomberg Television in London, aired yesterday, Dr.Jonahan said the threats by the Niger Delta Avengers (NDA) will be peacefully resolved.

”I cannot say the country from the beginning of our independence, that there was no corruption; yes there has been corruption. I did very well also to curtail corruption.

“My approach to corruption was ‘don’t make money available for anyone to touch’.

“We made sure that area of fertiliser subsidies was cleaned up and the whole corruption there was removed.

“I tried to do the same in the oil industry, but the very people that were accusing us of corruption, were the same people frustrating it; it’s unfortunate.”

Asked if he would be found guilty of corrupt practices, Jonathan said: “I wouldn’t want to make certain comments because, when a government is working, it’s not proper for immediate past presidents to make certain statements.

“I will allow the government to do the work it’s supposed to do.

“I wouldn’t want to make serious comments on that; it’s not proper.

“After all, these investigations, the whole stories will be properly chronicled.

“I’ve just left office and I should allow the President and his team to do what they believe is good for the country.”

Jonathan’s aides have come under heavy scrutiny since he left office, a situation he warned them of at the presidential dinner to mark the end of his tenure on May 28, 2015.

Officials of his party, the Peoples Democratic Party, PDP, have also been arrested and arraigned for corruption, but the anti-corruption agencies are yet to make public their findings from investigation on Jonathan’s involvement.

Dr. Jonathan expressed confidence that the authorities can reach an agreement with militants in the Niger Delta to stop their attacks that have slashed production.

“Definitely, it will be resolved; yes, government can always overrun restive movements and so on, but the Niger Delta is too delicate. The level of damage will be too much for the government to bear. We used dialogue,” he said.

Jonathan was vice-president when the government offered an amnesty and monthly stipends to militants to end years of instability, which had cut oil output. In February, Jonathan’s successor, President Muhammadu Buhari, reduced the stipends and cancelled security contracts with former military leaders.

A militant group known as Niger Delta Avengers has claimed attacks on facilities belonging to companies, including Chevron Corp., Royal Dutch Shell Plc and Agip Oil Co., causing Nigeria’s output to drop to an almost 30-year low of about 1.4 million barrels per day.

The violence has deepened the crisis facing Africa’s largest economy, which is already reeling from a slump in crude prices. Nigeria gets as much as two-thirds of its revenue and more than 90 percent of foreign income from oil.

“There’s no way he would have inherited an empty Treasury,” Jonathan said , adding: ”It’s not possible.”

Nigeria’s economy is contracting after a decline in the price of Brent by about half since the middle of 2014. Crude exports accounted in 2014 for as much as two-thirds of government revenue, with most state budgets relying on monthly handouts from the federal administration.

Finance Minister Mrs. Kemi Adeosun said last month that a long-delayed 2016 budget may not be fully implemented. The cash crunch has dampened optimism around the election of Buhari who campaigned on an anti-corruption platform, beating Jonathan in the first election victory by an opposition candidate in the nation’s history.

Nigerian authorities have gone after corrupt officials, recovering more than $500 million in cash so far. Investigations by the Economic and Financial Crimes Commission (EFCC) have brought top officials of Jonathan’s administration under scrutiny, such as his National Security Adviser, Sambo Dasuki, and then-spokesman of his political party Olisa Metuh.

Buhari not a killer—Femi Adesina