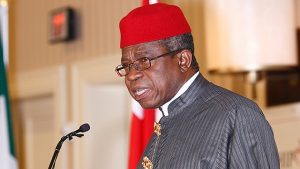 A former Minister of Foreign Affairs and a stalwart of the opposition Peoples Democratic Patty, PDP, Ojo Maduekwe, is dead.

Mr. Maduekwe died at about 7pm on Wednesday at a hospital in Abuja.

A close associate of the former minister told PREMIUM TIMES that Mr. Maduekwe was returning to Nigeria from the U.S. via Dubai when he fell ill.

“He fell ill while on air from Dubai and he was rushed to the hospital as soon as the plane landed in Abuja, but he died before doctors could do much,” he said.

The associate could not provide further details as he broke down while speaking on the phone.

Mr. Maduekwe was recently appointed the secretary of the PDP Board of Trustees.

Speaking to journalists from Saudi Arabia, the chairman of the BoT, Walid Jibrin, said Mr. Maduekwe died at a time his services were most needed.

“He passed on at a critical time when we needed him most. I was waiting for him to come back from U.S. where he travelled to so that we can find a way of addressing the problems in the party,” he said.

“He was a good man and an intelligent person, who can always find a way out of situations. The party will mourn him. We have lost a great man. I would have loved to come back immediately, but we have started the process already, but I will devote my time here in Saudi Arabia to pray for his family,” he said.

Mahrez noticed at Emirates after Arsenal’s win over Chelsea