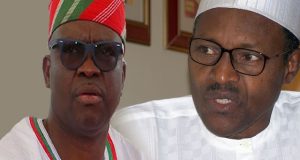 Ekiti State Governor, Ayodele Fayose, has blasted President Buhari, saying he cannot claim to be an angel and clean from corruption, revealing that the estate he (the President) built in Abuja is known to him (Fayose), and that the President’s wife (Aisha) was indicted over the Halliburton Scandal.

Mr. Fayose distributed a link to the U.S. Department of Justice Web site holding court documents where Mrs. Buhari was alleged to have transferred suspicious funds to a convicted former American congressman, Williams Jefferson.  (CLICK HERE FOR THE DOCUMENTS)

Fayose made the accusations in reaction to the alleged blocking of his bank account, which he operates with Zenith Bank Plc, by The Economic and Financial Crimes Commission (EFCC).

In a statement signed by his Chief Press Secretary, Idowu Adelusi, Mr. Fayose said President Buhari was far from being a clean man.

“Even the President cannot claim to be an angel,” the governor said, in reaction to the freezing of his Zenith Bank account by the Economic and Financial Crimes Commission.

“The estate he built in Abuja is known to us. His wife was indicted over the Halliburton Scandal (sic). When that American, Jefferson, was being sentenced, the President’s wife was mentioned as having wired $170,000 to Jefferson. Her name was on page 25 of the sentencing of Jefferson. We can serialize the judgment for people to see and read.

The governor’s Special Assistant on New Media, Lere Olayinka, later circulated links to and copies of the court document detailing Mrs Buhari’s mention in the scandal.

The documents showed that in some of the exhibits tendered in convicting Mr. Jefferson of bribery, Mrs. Buhari was mentioned as transferring $170,000 to the American politician using a firm as proxy.

“Government Exhibits 36-87 (6/26/02 $170,000 wire transfer from account in Nigeria in the name of Aisha Buhari to an account in the name of The ANJ Group, LLC, identifying “William Jefferson” as Beneficiary),” the U.S. Government Sentencing Memorandum said on page 22.

Mrs. Buhari could not be reached for comments. And Presidential spokesman, Femi Adesina, declined comments, saying he would need to check the documents himself before issuing an official statement.

Mr. Fayose’s comment sparked a recollection of how Mr. Jefferson, between 2000 and 2005, used his position as member of the U.S. House of Representatives to offer illegal services to private companies for cash rewards.

Mr. Jefferson and his family, according to U.S. authorities, received about $367,500 through through his firm, ANJ Group, for services rendered to iGate, an American broadband technology provider.
An indigenous firm, Netlink Digital Television, had signed a joint venture with iGate to set up digital satellite TV and broadband Internet services in the country. NDTV was owned by Oyewole Fasawe, a PDP chieftain at the time.

Mr. Jefferson was contracted to help promote iGate and NDTV partnership in Nigeria.

Following a lengthy trial, Mr. Jefferson was convicted in 2009 and sentenced to 13 years in prison.

Although Mr. Fasawe was arrested in 2005 by the EFCC, he was never convicted.

Former Vice President Atiku Abubakar were also said to be a person of interest in the allegations. -Premium Times