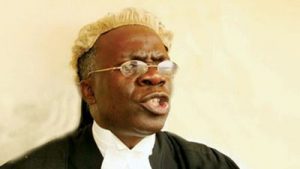 Human rights lawyer, Femi Falana has declared that the Economic and Financial Crimes Commission (EFCC) can investigate and prosecute the Ekiti State Governor, Ayodele Fayose, even as a sitting governor.

Falana quoted judicial precedents and legal instruments, which he said, justified the decision of the anti-graft commission to investigate and freeze Fayose’s bank accounts.

The human rights lawyer in a statement on Wednesday said Fayose could not rely on section 308 of the 1999 Constitution to escape criminal act.

He said the immunity clause did not come to play in criminal investigation of a sitting governor or a sitting president.

According to Falana, Fayose’s diverse criminal antecedents ranged from the looting of N1.2 billion from the state’s treasury in 2004 to alleged involvement in the murder of Tunde Omojola and the 2014 Ekiti governorship election rigging.

He said that the EFCC was currently being investigated in connection “to a coup, which led to the re-election of Fayose” in the Ekiti State governorship held on June 21, 2014.

Falana added that in view of the fact that the effect of section 308 of the 1999 Constitution had been watered down, Fayose could not invoke the immunity clause to shield himself from investigation.”

“While not challenging the allegation by the EFCC that the sum of N1.3 billion has been traced to his personal account, Mr. Fayose has attempted to hide under the immunity clause to shield himself from investigation. Contrary to the governor’s claim he does not enjoy immunity from investigation with respect to his criminal involvement in treasonable conduct and corrupt practices.

“It is trite law that all the public officers protected by Section 308 of the Constitution can be investigated for corruption and other criminal offences.

“If he is indicted, Fayose ought to be prosecuted by the EFCC since the immunity of a governor is put in abeyance when the legitimacy of his election is in dispute. In his desperate bid to divert public attention from the ongoing investigation of the criminal diversion of public funds, Fayose has attempted to link me with his indictment by the Nigerian Army and the EFCC.

“Notwithstanding that the allegation is completely baseless, I fully support the investigations. I do not need to instigate the anti-graft agencies to enquire into the activities of a serial treasury looter.
“Having admitted his involvement in the coup which occurred in Ekiti State which culminated in his emergence as the Ekiti State governor, Fayose ought to be prosecuted for treason which arose from the electoral malfeasance,” he said.

Falana added that “the senior lawyers who have questioned the freezing of Mr. Fayose’s account on the ground that the EFCC did not obtain a court order have not read section 28 of the EFCC Act which provides that “where a person is arrested for an offence under this Act, the Commission shall immediately trace and attach all the assets and properties of the person acquired as a result of such economic or financial crime and shall thereafter cause to be obtained an interim attachment order from the Court”. The law permits the EFCC to freeze an account or attach a property of a criminal suspect and proceed thereafter to obtain an ex parte order from the appropriate court.

“I am not unaware that by the strict interpretation of section 308 of the Constitution no court process can be issued or served on a governor. But because immunity cannot be pleaded or invoked to cover electoral fraud, elected governors are served with court processes and dragged to court to respond to allegations of electoral malpractice.

“However, in order to give effect and validity to the equality of the rights of all contestants in presidential or governorship elections, it has been held by the Supreme Court that immunity clause cannot be invoked in election petitions. Otherwise, public officers covered by the immunity clause may take advantage of their positions to rig elections and thereby sabotage the democratic process.”
Falana cited different judicial precedents that justified the criminal investigation and prosecution of a sitting governor or a sitting president in connection to electoral malpractice, noting that immunity clause did not apply. -Nigerianeye