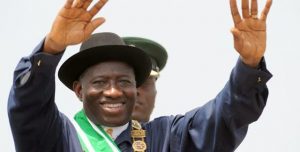 The ex-president was welcomed by friends and well-wishers at the Port Harcourt International Airport, Rivers state, earlier today when he arrived from his multi-city speaking tour.

Nigerians on Wednesday, took to the social media, reacting to the arrival of former President Goodluck Jonathan back to the country, after spending several weeks abroad in the United Kingdom, United States of America, Côte d’Ivoire among others. -Nigerianeye