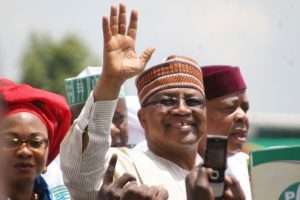 Early in the week, rumours of his death went viral on social media, save for the phone inter­view he granted a popular International Televi­sion Network

He was in company with his son, Aminu and daughter, Halima, while former Governor A. A. Kure, Mohammed Babangida, Aisha Babangida, Umar Ndanusa and former Federal Permanent Secretary, Idris Adamu Kuta received him at the Airport. -The Sun

Tax justice key to schooling for all – ActionAid