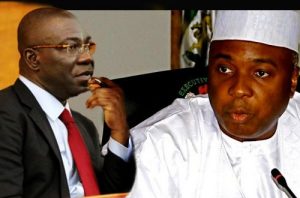 Justice Chukwu Evoh, of the Federal High Court, Abuja, is dead.
Chukwu presided over an alleged forgery case instituted against Senate President, Bukola Saraki and Deputy Senate President, Ike Ekweremadu by the Senate Unity Forum, with members including Senators Kabiru Marafa, Suleiman Hunkuyi, among others.
They opposed Saraki and Ekweremadu’s leadership of the 8th Senate and filed a suit alleging that the Senate Standing Rules used for the election of Saraki and Ekweremadu on June 9, 2015, were forged.
According to a statement issued by Emmanuel Gako, the court’s chief registrar, Chukwu died after a brief illness.
The statement said the court declared yesterday a work free day in honour of the departed judge.
It added that all court registrars had been directed to adjourn cases that were initially slated for hearing yesterday to ensure total compliance.
The deceased was also handling the trial of Murtala Nyako, former governor of Adamawa State, over allegations of abuse of office and economic crimes leveled against him by the Economic and Financial Crimes Commission (EFCC).
The case was recently re-assigned to the deceased judge by Ibrahim Auta, chief judge of the court.
This followed the declining of Justice Adeniyi Ademola,  to give judgment in the matter following an allegation of bias raised by Ekweremadu.
Chukwu was born on August 24, 1964, in Afikpo North Local Government Area (LGA) of Ebonyi state and was appointed a judge of the court on January 23, 2008. -The Sun