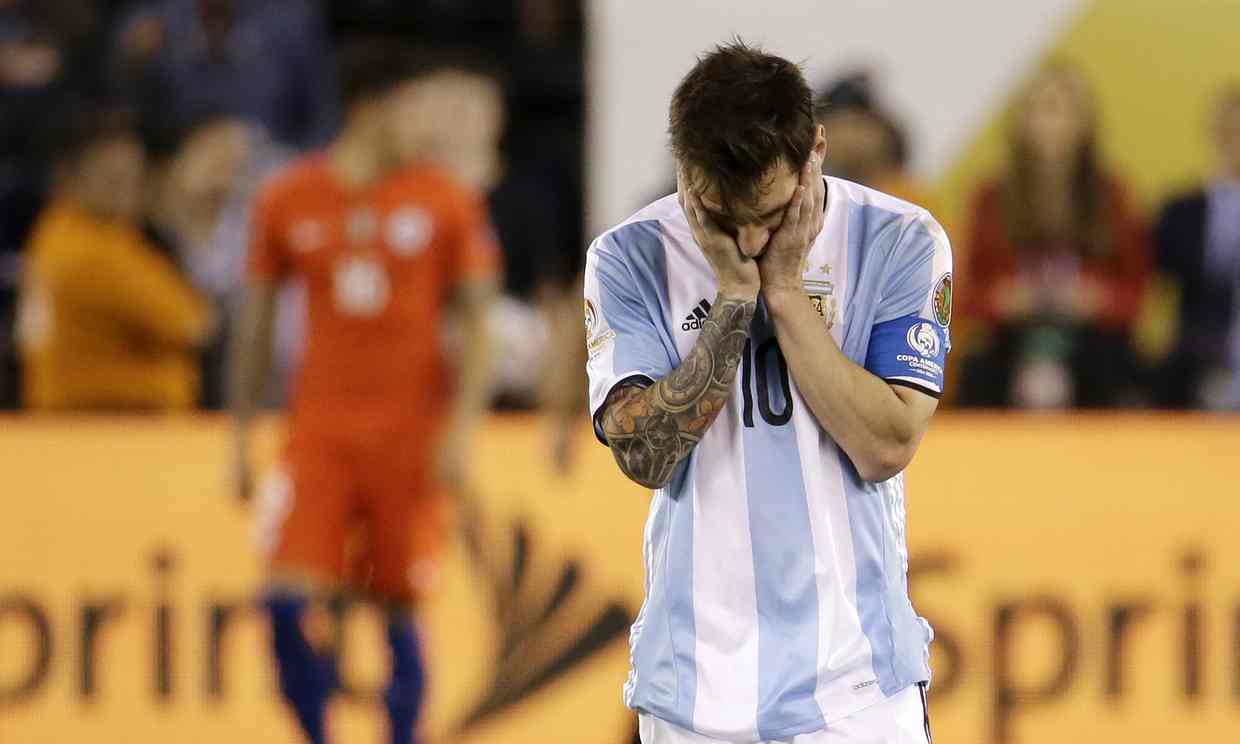 Lionel Messi has said his international career is over at the age of 29 after he blazed a penalty over the bar in Argentina’s defeat in the Copa América final to Chile.

The Argentina captain missed his spot-kick in the decisive shootout at Met Life Stadium, which Chile went on to win 4-2 and secure a second Copa crown in two years, and was disconsolate on the pitch after the game.

“It’s tough, it’s not the time for analysis,” he said. “In the dressing room I thought that this is the end for me with the national team, it’s not for me. That’s the way I feel right now, it’s a huge sadness once again and I missed the penalty that was so important.

“I tried so hard to be [a] champion with Argentina. But it didn’t happen. I couldn’t do it. I think it’s best for everyone, for me and for many people who want it. The choice for me is over, it is a decision. I tried many times [to be a champion] but did not.”

The defeat continued Argentina’s 23-year trophyless run and Messi’s own personal misery now extends to four lost finals with the national side – at the 2014 World Cup against Germany and at three Copa Américas, in 2007, 2015 and now 2016.

Argentina coach Gerardo Martino said: “The burden of the consecutive games [lost] has been accumulating these last two years. He feels like you would expect a player to feel after playing and losing a final.”

Messi had enjoyed another impressive outing in the latest final of his international career but failed to find a finishing touch over 120 minutes of play.

Still, few would have expected him to miss from 12 yards after Chile’s Arturo Vidal had seen the first kick of the shootout saved by Sergio Romero. But the Barcelona forward conspired to balloon the ball over the bar and pass up the chance to give his side an early advantage.

Messi, a five-time Ballon d’Or winner, was representing his country for the 112th time since making his debut in 2005 as an 18-year-old..

In that time he scored 55 times, including five this tournament. He surpassed Gabriel Batistuta’s all-time leading mark of 54 for Argentina with a superb free-kick in last week’s semi-final against the US.

“Messi’s numbers are unparalleled and I think they’ll remain that way forever, because it’s impossible for a football player to do what Messi has done,” said Juan Antonio Pizzi, the Chile coach who is from Argentina. “My generation can’t compare him to [Diego] Maradona that’s for my generation, because of what Maradona did for Argentine soccer. But I think the best player ever played today here in the United States.”

Immediately after Sunday’s shock announcement, goalkeeper Romero said he hoped Messi would change his mind. “I think Leo spoke in the heat of the moment because we missed that great chance,” said Romero.

Messi now stands to miss the 2018 World Cup, with the odds of Argentina breaking their long-standing major trophy drought in Russia just having lengthened significantly.

Africa loses $148b to corruption yearly