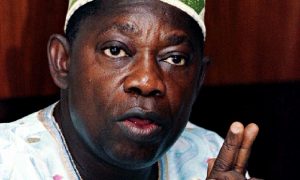 Twenty-three years after the annulment of the June 12, 1993 presidential election, the family of the acclaimed winner, Chief MKO Abiola, has asked the federal government to de-annul the election, declare him the winner and pay his accrued entitlements as president to the family.

This was the request made by the head of the family, Alhaji Muritala Abiola, on Sunday at the commemoration of the June 12, 1993 presidential election.

The event was organised by the state government, and the day started with a democracy walk from the June 12 Cultural Centre, Kuto, Abeokuta and it terminated at Oke Ido ancestral home of the Abiolas, where speeches were made.

Muritala who’s a younger brother of the late acclaimed winner of the June 12, 1993 election, said if the head of the Interim National Government, Chief Ernest Shonekan, who held the position for only three months, still enjoys the perks of a former president.

He said their late bread winner deserved even much more, for dying for the enthronement of democracy in the country.

He said, “First,we want the federal government to declare June 12 as democracy day. They should do even more than that.

“The first thing the family wants is that, for example, Ken Saro Wiwa died fighting for this Ogoni oil spillage, the Federal Government is doing the cleaning up of the oil spillage in Ogoni land.

“MKO was killed because of election he won maybe it is you journalists or the Nigerian government calling him acclaimed winner. He is not acclaimed winner, they should confirm him as slain President of Nigeria.

“Afterall somebody ruled for maybe less than six months, they said Interim National Government. He is still enjoying Presidential privileges, so MKO should be declared President although slain, so all the entitlements belong to the family.”

The head of the family thanked the state government for keeping the memory of the late MKO Abiola alive by staging walk democracy walk for the past five years, but berated the government for not declaring Monday June 13, as a work-free day, since this year’s June 12, fell on a Sunday.

He argued that if public holidays like Independence day which fell on Sunday could be declared the following day, Monday as a public holiday, this year’s June 12, should not have been different.

He noted that it was rather painful for Ogun State House of Assembly to have enacted a law declaring June 12 as a public holiday, and the executive arm would refuse to honour it.

He said, “I don’t want to raise eyebrow, because as today I am aggrieved, that’s my own opinion. People are telling us rule of law. June 12, Ogun State House of Assembly enacted a law, declaring June 12 every year public holiday. Just before yesterday(Friday) when we went to Oke-Mosan(Governor’s office) we are hearing that because it falls on Sunday, there is no public holiday.

“It means the Ogun State Government breaks the law because if it’s October 1st that falls on Sunday, they will give them public holiday on Monday. It is just the same thing but I believe we don’t have leaders, we have opportunists.”

He, however, appealed to the state government to return the school established by the late Abiola, Salawu Abiola Comprehensive High School, Osiele, Abeokuta, to the family to administer.

On his own part, the governor, Senator Ibikunle Amosun, said everyone knew that late MKO Abiola was the adjudged winner of the June 12, 1993 presidential election but he was denied the chance to become the president.

Amosun who was represented by the deputy governor, Mrs Yetunde Onanuga, described him as the hero of the nation’s current democracy.

He said, “We have been organising the democracy day walk and identifying with the Abiola family for the past five years that this administration have been in government.

“He was a philanthropist and the hero of our current democracy.”

One of the children of the deceased, Lekan Abiola, who was also present at the event, bemoaned the death of their father, adding that what the family lost could not be regained.

Narrating how he got the news of the mother’s (Alhaja Kudirat Abiola’s) death, he said on that fateful day she was murdered, he said he called the mother’s telephone line, but it did not connect.

He said he later got through to his brother, Jamiu, who broke the sad news to him.

He said, “What we lost, we cannot get it back. The day they killed my mother. They shot her at the forehead(pointing to his own head).

“I called her telephone line it was not going through, then I called my brother, Jamiu. He was crying, then I asked him ‘what happened?’ He said mummy has been killed. I thought I did not hear him well, I replied ‘you mean dad?.’ Because it was dad was in detention. But he repeated that it was mummy.”

He said it was sad that the killers of their mother did not allow her to see any of the 20 grand children, the children had after her death.

He equally thanked the state government for its support for the family and “remembering our father.”

Others present at the event were the Speaker of the state House of Assembly, Suraj Adekunbi, Head of Service, Sola Adeyemi, and Secretary to the State Government, Taiwo Adeoluwa among others. -Premium Times