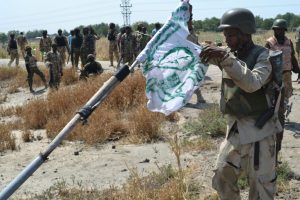 The Nigeria Air Force (NAF) has carried out its first major air campaign under the recently launched ‘Operation Gama-Aiki’ mission, during which 15 Boko Haram insurgents were killed.

The terrorists were killed as an Alpha Jet bombed their convoy in the northern part of Borno state, officials said.

The spokesman of the Nigerian Air Force, Ayodele Famuyiwa, a group captain, said the insurgents were spotted under trees by one of its intelligence planes, King Air A350i, while on surveillance of the insurgency-ravaged mission.

They were immediately bombed, with 15 of them killed and their seven Hilux vans destroyed, Mr. Famuyiwa said.

Some wounded terrorists fled with gunshot wounds, the statement said.

“The casualty figure was confirmed by ground forces who subsequently consolidated on the gains of the air effort to pursue and inflict further casualty on the fleeing wounded members of the terrorist group,” the statement said.

Boko Haram fighters had two weeks ago recaptured the communities around the border with the Niger Republic from where they had been launching attacks on civilians and security forces.

Group Captain Famuyiwa, who is the NAF’s Director of Public Relations and Information, said the surveillance aircraft was able to send quick signals back to the Alpha Jet which came to attack the Boko Haram location and dislodged their movement towards a ground troop location.

“The Air Component of OPERATION LAFIYA DOLE has foiled a plan by Boko Haram Terrorists (BHTs) to ambush own surface forces harboured at Doron Naira, north of Borno State. Earlier today 19 June 2016, a Nigerian Air Force (NAF) King Air A350i Beechcraft aircraft on Intelligence, Surveillance and Reconnaissance (ISR) mission sighted a group of BHTs in 7 Hilux vehicles hiding under tress at a location along the axis of advance of own ground forces towards Kangarawa, north of Borno State.

“Following this discovery, an Alpha Jet was scrambled to attack the BHT location. The attack was successful as 15 members of the BHTs were killed and the whole vehicles knocked out. The casualty figure was confirmed by ground forces who subsequently consolidated on the gains of the air effort to pursue and inflict further casualty on the fleeing wounded members of the terrorist group. Troops also confirmed 2 gun trucks were among vehicles destroyed by the Alpha Jet as 2 x AK-47 rifles, 2 x RPGs and cache of assorted munitions were recovered.

“The latest victory against the BHTs brings to fore the important role of airpower in counterinsurgency operation. In furtherance of this role, the NAF has been relentless in its effort to shape the battlespace and provide favourable environment for own surface forces to operate.

“The recent deployment of additional platforms to increase the tempo of air operations at the commencement of OPERATION GAMA AIKI is aimed at fostering this objective. The foiled plan to ambush own surface forces by BHTs shows that the air efforts by the NAF has started to yield the desired results”.

No gas in our depots – DAPPMA

We are true coalition of Nigerians – PDP