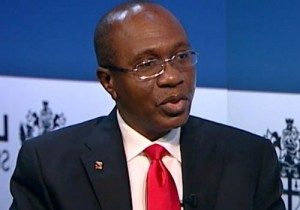 Central Bank of Nigeria (CBN) yesterday kept to its promise of liberalising the foreign exchange market when it unveiled the long-expected new forex regime.

The old forex regime had capped the exchange rate at N197/$1 on official window while the new regime cre­ates a single market struc­ture of autonomous window.

Governor of CBN, Mr. Godwin Emefiele, while unveiling the new guideline in Abuja, Wednesday, said it would be a regime that would be purely market-driven using the Thomson- Reuters Order Matching System as well as the Con­versational Dealing Book.

“As long as there is one window, whatever comes out at the end of the day, the marginal rate will be the rate that will be recognised of­ficially. I do not expect that any other rate will be recog­nised. But I think I will be able to clarify a few issues you did not raise, which I know are ringing in the heart of people.

The first is what we call the OTC FX features. The FX features is an innovation, which we have introduced to moderate volatility in the foreign exchange market. It is a situation where it makes it easy for you as business­man to plan your business at the rate at which you want to do your business. You do not have to fear that because of what is happening to crude prices today, you may not able to source your dollar in the next six, seven or nine months and for that rea­son, you begin to take some precautionary decisions to say that I want to front-load the demand for foreign ex­change,” he said.

He used the occasion to announce the introduction of primary and non-primary market dealers in the new regime and their operational guidelines or qualifications.

Meanwhile, the unveil­ing of the flexible foreign exchange rate has left most investors unconvinced and at the same time cautiously optimistic as Nigeria’s stock market gained 3 per cent fol­lowing the announcement.

An analyst at Sterling Capi­tal Ltd, Sewa Wusu, described it as a welcome development as the naira exchange rate would be determined by the forces of demand and supply, which will be significant for the economy and as well posi­tive for the stock market.

He affirmed that the policy would attract flows into the system, create dollar liquidity buffer for the foreign reserves and cushion the huge gap oc­casioned by parallel market.

People and businesses can now know the true rate of the naira and businesses can plan. The issue of trying to create a features market will be there because it will also allow for hedging, as it will create more opportunities for end users of dollar.

“It is also a positive for the stock market. By the time foreign investors start com­ing in, the market will grow due to the dollar liquidity.” -The Sun