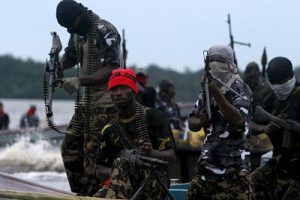 In a swift reaction, the Niger Delta Avengers, NDA, last night, denied killing two soldiers in the bloody attack of a houseboat by suspected militants in Warri, Delta state on Wednesday, but admitted blowing up two crude oil pipelines in Bayelsa State.

A source said the heavily armed militants, who came in five boats, not only blew up the houseboat with explosives but also sank it after killing and mortally wounding all the men on board.

There were, however, conflicting reports on the casualties and actual location of the attack. A report said only two soldiers and one civilian was killed,

with many injured, another said the casualties were more than 10. It was learned that suspected members of Niger Delta Avengers, NDA, carried out the killing after attacking Nigerian Petroleum Development Company, NPDC, houseboat at Ijere in Warri South Local Government Area of Delta State, According to a statement by the Assistant Director, Public Relations, 4 Brigade, Nigerian Army Headquarters, Benin City, Edo State, Captain Jonah Unuakhalu, the incident occurred Wednesday night. He explained that the suspected militants approached the houseboat in five speed boats mounted with 250 horse power engines, dressed as normal commuters.

However In an electronic mail sent at 9.47 pm, the group said: “The Niger Delta Avengers are not involved in the attack of the military houseboat around Warri, Delta State. Killing of sleeping soldiers is not our style.

We promise the world that in this process of liberating our people, not a single blood of Nigeria soldiers will be wasted despite the provocation.

“Even the inhumane Nigeria soldiers are exempted, our war is on oil installations not to take innocent lives. For the fact we can’t give life, we also don’t have the power to take any life. But we (Avengers) are assuring the families of the affected soldiers that we will bring the culprits to book. “When it is time to face the military in combat, let the whole world know that we won’t be the ones to throw the first punch.

“This message is going to all groups parading themselves as freedom fighters. You can fight for your people without killing innocent souls. NDA has proved, we were able to drop Nigeria oil production from two million barrels to just 800,000 barrels without killing a soul. “We are warning every group to follow our footsteps.

The days of killing and kidnapping are over.” It also tweeted: “At about 2:00am today (yesterday) @NDAvengers blew up the Ogboinbiri to Tebidaba and Clough Creek to Tebidaba Crude Oil pipelines in Bayelsa State. “This is in line with our promise to all international oil companies and Indigenous Oil Companies that Nigeria oil production will be zero.” -nigerianeye