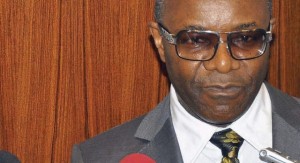 President Muhammadu Buhari has appointed his National Security Adviser, Retired Gen. Babagana Mongunu to head the team that will dialogue with the warring Niger Delta militants.

The Minister of State for Petroleum, Dr. Emmanuel Ibe Kachikwu broke the news to journalists in Abuja Monday.

According to him, he is a member of the team which also includes the nation security and service chiefs and other stakeholders to distill military intervention in the area so that dialogue can take place.

“We are making contacts with those involved that we can identify and through them to the ones we cannot identify so that there will be inclusiveness for dialogue. Our prayer is that this works so that we resort to dialogue instead of use of force to solve problems. ….it is always difficult when arms are used against fellow citizens whether by the militants or by the government, “he said.

He however noted that the crisis in the region has culminated in a loss of 600,000 barrel per day.

Kachikwu said that for the government to recover the lost barrel it has to first win back the hearts of the aggressive militants.

He added that that he has always been of the disposition that government has to engage the unhappy citizens.

Assuring the country that government is opened to dialogue, the minister said that “unless that the government is pushed to take extreme measures, the desire of his excellency, Mr. President is to try engage and dialogue with issues.

“The President has appointed a team led by the National Security Adviser to head the process of a very intensive dialogue…and I am sure in the ensuing one week the intensity of that dialogue will ramp up.”

Kachikwu said that intensity of the attacks was causing a lot of problems such as pollution and affects on consistent production.

His words: “Coming to what is happening in Nigeria in terms of security challenges in the oil industry, over the last two months we have lost about 600,000 barrel from various attacks of militants in the area.

“We are making efforts to see how we can get those back obviously and getting the barrels back is also getting the hearts of people back. My attitude has always been that when citizens are unhappy about something we try to engage.

“And I know given the intensity of the attacks which is causing a lot of problems, both in terms of pollution and in term of continuity  of production and sanctity of career paths of the oil industry to what has been happening, the response has been to ensure adequate security coverage in those areas and for the safety of lives and property and equality to bring tranquility back to what is ordinarily a very serene and wonderful geographical space to be in.

“I am from the Niger Delta and my first appeal is to my brothers who engage in those protests to sheath the sword and the dagger and then get back to the table so that we can have conversation as Nigerians. …the answer to the issues is not taking up of arms. The Federal Government is committed to continue this dialogue.”

He stressed the fact that the President was interested in restoring peace to the Niger Delta, adding that Buhari has urged the use of every available opportunity to dialogue with the militants to end the matter.

According to him, between now and August, if peace reigns, the sector would be able to raise the volume of production substantially.

Kachikwu promised that the ministry and its related agencies would work hard to cover the gaps in a manner that the losses would not affect this year’s budget significantly. The Sun