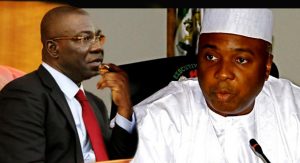 Senate President Bukola Saraki and his Deputy Ike Ekweremadu were told yesterday to face their trial for alleged forgery of the 2005 Senate Rules.

All Progressives Congress (APC) National Chairman Chief John Odigie-Oyegun said the party had nothing to do with the matter.

Odigie-Oyegun said the party had no business interfering with judicial matters, pointing out that it will, however, find out the truth of the matter.

It was learnt yesterday that the planned trial may not start today because the accused could not be served the court papers.

Some senior officials of the Federal Ministry of Justice in Abuja said that the arraignment had been scheduled for today.

But it was gathered at Court 32, High Court of the Federal Capital Territory (FCT) in Jabi, Abuja, where the case has been assigned, that the charge had not been served on all the defendants as required by law.

Court officials said a date will be fixed for arraignment as soon as service is effected on the defendants.

The office of the Attorney General of the Federation (AGF) filed a two-count charge on June 10 at the High Court of FCT’s Registry in which Saraki and others are charged with alleged forgery and conspiracy.

Also named in the charge are the immediate past Clerk of the National Assembly, Alhaji Salisu Maikasuwa and Clerk of the Senate Mr. Ben Efeturi.

Odigie-Oyegun urged the media to investigate if the Senate Rules were actually tampered with.

He said: “At this stage l don’t think there is anything to say. In fact, everything is still a guess work? Nobody has said yes or they have been arrested or asked to make statement or whatever.

“As a party, we do not think it is the party’s business to interfere in judicial matters of that nature. We will just wait and see. We are even making investigations to be sure that is the situation”.

Reminded that the allegation could affect the relationship among the party, the Presidency and the Senate, Odigie-Oyegun said: “No, no, no. I don’t know, this is the kind of problem that the press always causes. You are now taking the sensational aspect. You are forgetting the nitty gritty?. Did what they say happen really happened? That is what you should look at.

“Take the two copies (the new copy and the old copy) of the Senate rules and see if there is a difference. If there is a difference, at what former meeting was it approved and adopted? You should start from this so that when you are commenting, it would not be sensational; it will be based on facts and reality.

“This is where l expect you to start. Don’t start making it party verses x-issue. The point would be: was an offence committed? establish that first and then you can move on”. -Nigerianeye