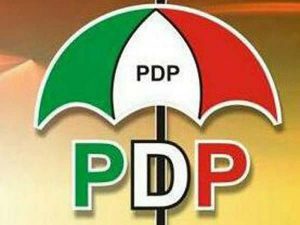 Barely nine days after policemen cordoned off the national secretariat of the Peoples Democratic Party (PDP), anxious workers were yesterday allowed into the building.
It was gathered that the action of police was at the instance of the Board of Trustees (BoT) of the party, under the leadership of Senator Walid Jubrin. The party’s BoT, it was gathered, wrote to the police headquarters, informed it  the leadership tussle and further requested that workers be allowed to access their offices.
Former minister of Transport and BoT Secretary, Chief Ojo Madueke, confirmed  to Daily Sun in a telephone interview,  the involvement of his organ of the party in the police action.
Madueke said: “Yes, we formally requested that the police allow workers gain access to the premises so they can continue to work. We shall be coming tomorrow (today) to address the workers and also, address the media.’’
It was further gathered that the caretaker committee put in place by the national convention penultimate weekend in Port-Harcourt, under the leadership of former Kaduna State governor, Senator Ahmed Makarfi and Senator Ben Obi, as chairman and secretary, respectively, including five others, may resume this week at Wadata Plaza, moniker of the party’s secretariat.
At a peace meeting brokered last Thursday, in Abuja, by an expanded caucus of the party, two of the factions enmeshed in the leadership tussle agreed to work together.
In the resolutions, read to newsmen by Madueke, the meeting urged the Makarfi committee to expand the scope of its work to accommodate members of the Concerned PDP Stakeholders led by former deputy Senate President, Ibrahim  Mantu.
The meeting also resolved to set up a high-powered committee for speedy resolutions of all contending issues.
Former Borno State governor and chairman of the National Working Committee (NWC) dissolved in Port-Harcourt, Senator Ali Modu Sheriff, kicked  against the resolutions of the party’s expanded caucus. He dismissed it as an infraction on the party’s constitution and contempt of the declaratory judgment of Justice Hussein Buba, which recognised him as the authentic chairman of the main opposition party. -The Sun