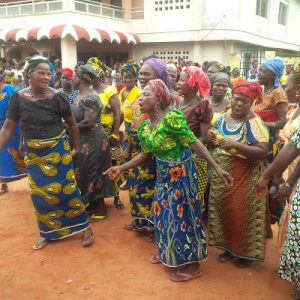 Residents of Nze community in Udi Local Government Area of Enugu State, yesterday protest at the Ibute Nze Community square where they expressed sadness over persistent attack on the community by suspected Fulani herdsmen.

During the protest, which coincided with the donation of relief materials to the community by Enugu State Association, Japan, hundreds of women in the community said they have had enough of rape and destruction of their farmlands by the herdsmen.

They disclosed that the herdsmen invaded their farmlands three times within the week, chased farmers away and fed their cows on the crops.

One of the victims, Mrs. Caroline Eze told journalists that,

“I was in the farm working with my daughter on Wednesday when they came, I pleaded with them not to enter my farm; they warned me to leave or I would lose my life; at that point, I ran away with my daughter.

“The next day, one of our relations went to the farm and discovered that the entire cassava farm was gone; the herdsmen were also here on Tuesday, and on Wednesday they returned and finished what was left.

“As I speak with you, all my sufferings have ended in vain; I have nothing left with which to feed; how long shall government allow us to continue suffering in the hands of these people?”

The women, who later broke into songs of anger, maintained that “Fulani herdsmen should leave us; they have raped us and our daughters enough; they have brought poverty to us”.

Meanwhile, the traditional ruler of the community, Igwe Nodilim Onwukwe Nze, while speaking to journalists said he was deeply pained by the development.

The Royal Father said it was shocking that while efforts were still being made to resolve issues arising from previous attacks, the herdsmen returned with their cows and finished what was left in the farms.

He recalled that, “they have been here causing problem for a very long time; we have been managing them, but since last year that Buhari took over as President, things became worst.

“Two weeks after Nimbo incident, we got information from two of our people who are very close to the herdsmen that they were coming to attack us. Our people fled their homes, people returned from the cities and collected their residents. But the Governor later came; the leaders of the herdsmen were also here and assurances were given to our people that they would not be attacked.

“Initially they denied making the threat, but we went to service providers and the whole thing was clear; we are still waiting for the police to take action.

“We have told the Governor that they should leave our place for now, but they are still here even as at yesterday destroying farm lands. They up-root cassava, vegetable and other farm crops and feed their cows on them.

Igwe Onwukwe, however, vowed that his people would no longer fold their hands, stressing that, “it is now going to be like Nimbo where security was entrusted into the hands of the police but they failed; we are going to mobilize our youths to secure our people. All we are asking the State government is to give us the necessary support. We are no longer going to take it.” -Daily Post