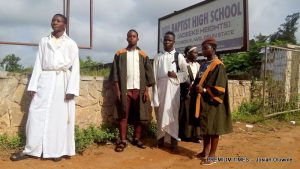 Confusion reigned supreme in Osun State during the week as many students of Baptist High School, Adeeke, Iwo, appeared for lessons in religious garbs instead of their usual uniforms. While some christian students discarded the uniforms outrightly in preference for choir robes and cassocks, others wore the religious outfits atop their uniforms.

And to their schools they all trooped to join their hijab- wearing muslim colleagues. The result was an unhealthy cacophony of funny-looking students and an unending allegations and counter allegations about how the situation degenerated that far.

Promptly, the state government issued a stern warning against the actions of the students as Governor Rauf Aregbesola warned on Tuesday that any student found disobeying school rules and regulations by appearing in school with any other attire aside the uniform, risks expulsion.

But in a daring move, more students arrived the school for the next day’s lessons in church robes and other religious apparels. Expectedly, they were turned back by security men manning the gate who, however, allowed female Muslim students who wore hijab into the school premises, citing the governor’s orders.

With the crisis deepening rather than abating all through the week, parents and other stakeholders are worried it could lead to a riot amongst students. Some observers of the ongoing crisis want the government to nip it in the bud before it escalates into a full blown religious face-off.

A community leader in the town, Chief Tunji Opawunmi, told newsmen that the people of the town can no longer sleep with their eyes closed as they fear a possible riot amongst the students. He said the peace in Iwo today is that of the graveyard.

“On Thursday, it took the intervention of the paramount ruler of the town, Oba Akanbi, to avert a total break down of law and order in the school premise as clerics and parents dared one another over the issues. Oluwo had to use wisdom by inviting both the Christian and Muslim leaders to his palace for a meeting.

“But for that singular act, I can tell you that the story would have been different today because the students were already taking sides with their various religious leaders and punches were about to be exchanged across the two divides. From information available to me, the meeting with the Oluwo was deadlocked as both sides insisted on their positions.

“If you go round Iwo now, you will feel the animosity between the two camps. Our children have been turned against one another by this religious disagreement. Our fear is that unless something urgent is done, they may engage themselves in fights that will ignite a full blown riot,” Opawunmi said.

The entire controversy, it would be recalled, was ignited by the Friday 3rd June judgment of an Osun State High court that ordered that Muslim students should be allowed to wear hijab in all the public primary and secondary schools owned by the state government.

The court presided over by Justice Jide Falola in a 51-pages judgment held that any act of molestation, harassment, torture and humiliation against female Muslim students using hijab, constitutes a clear infringement on their fundamental right as contained in Section 38 of the 1999 constitution of Nigeria, as amended.

The Osun State Muslim Community on February 14, 2013 had dragged the state government to court, seeking an order of the court to allow female Muslim students enjoy their fundamental rights by granting them order to use hijab in public schools.

In his judgment, Justice Falola traced the history of religion and observed that religion was introduced to the case when CAN and others joined the suit, noting that he decided to deliver the judgment after all plea to settle the matter amicably has proved futile. While government kept mute on the judgment, the Osun State Christian Association through its counsel, Barrister Ayandokun, signified its intention to appeal the case in the appellate court.

Furthermore, the state CAN urged the state government not to execute the judgment with a threat that if such was done, it would direct Christian students in public schools in the state to start wearing church garments to school once Muslim female students start using hijab in schools in line with the court judgment.

And following the appearance in school by some students adorning the hijab, and their admittance into the school by the authorities, some Christian students, allegedly prompted by a directive of the state chapter of CAN, took to wearing church robes and similar apparels to school.

According to a communiqué issued by CAN and signed by Osun State CAN Chairman, Rev. Elisha Ogundiya, the association faulted the court verdict and warned the state government not to implement the judgment.

Ogundiya said that the judgment read severally that hijab is a means of propagation of Islam which he said is a fundamental right of Muslims girls and ladies which he claimed violates the religious right of the original owners of the mission as agreed upon when the schools were taken by the then government of Oyo state in 1975.

He claimed that at the point of takeover of the schools in 1975, government guaranteed that only administration of the schools were being taken over and not the philosophy, beliefs and aim behind the establishment of the schools.

But the Vice President of Osun State Muslim Community, Alhaji Mustapha Olawuyi, appealed to Osun CAN to shun lawlessness in the best interest of justice and peace.

“There should be no argument concerning the implementation of the court judgment that granted the fundamental rights of female Muslim students in public schools in the state to use hijab during the school hours. Rather we should all commend Justice Falola for upholding his judicial oath to deliver justice without fear or favour while we appeal to the state government and all law enforcement agents to call the Osun CAN to order so as not to trigger avoidable religious clash in the state.

Reacting to the development, Governor Rauf Aregbesola advised all aggrieved parties in the court judgment to channel their grievances according to the rule of law and not result to self help. He also insisted that any student found disobeying school rules and regulations risks expulsion. However, the governor refused to say anything on his administration’s disposition to the court judgement.

He stated that there are other legal options opened to any party who feels strongly about the judgment, saying the Judiciary is an independent arm of government, the decisions of which are not subject to any influence by other arms of government.

Another source, a former council chairman in the state, said following a prayer meeting held by CAN in Osogbo which centred on the court ruling on hijab, there has been apprehension in the state over the matter. He cautioned religious leaders against inciting their followers into disorderliness.

“Many people have been talking about the prayer meeting held in Osogbo over the matter that happened here in Iwo. We were told some inciting statements were uttered. Some of these students we learnt were in attendance. Our fear is that religious leaders are inciting their followers to cause confusion in Osun State,” he said.

But Ogundiya nothing inciting was said at the Osogbo prayer meeting. According to the CAN boss, the prayer was also meant to seek peace from God and to nullify anti-kingdom laws and dealings with satanic forces tormenting the state in the past few weeks. He however advices that the government should promptly return mission schools to the original owners.

“We don’t want crisis in Osun because of hijab issue. Already the state is being oppressed by the demonic spirit and evils as well as the country at large.”

He contended that in as much as they were trying to resolve the crisis with prayer, if government should expel any Christian pupil or student, all the students in public schools would be sent packing.