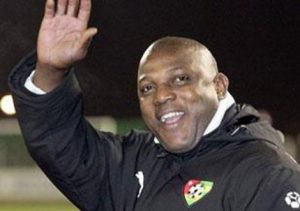 The former Super Eagles coach, Stephen Okechukwu Keshi, is dead, he was 54, his family has announced.

Emmanuel Ado a brother to the late coach told Premium Times the 54-year-old died of Cardiac arrest in the early hours of Wednesday, June 8.

He continued “Our son, brother, father, father-in-law, brother-in-law, has gone to be with his wife of 35 years (Nkem ), Mrs. Kate Keshi, who passed on on the 9th December 2015.

“Since her death, Keshi has been in mourning. He came back to Nigeria to be with her. He had planned to fly back today Wednesday, before he suffered a cardiac arrest. He has found rest.”

Though deeply mourning the shock exit, Mr. Ado said the family remained grateful to God for the life spent by the Big Boss.

Mr. Keshi had lost his wife of 35 years, Kate, to cancer last December.

Mr Keshi, popularly called the Big Boss, is the only Nigerian coach to have won the Africa Cup of Nations.

He also became the second person in history to win the competition as a player and as a coach after Mahmoud El-Gohary of Egypt when he led the Super Eagles to win the tournament in 2013 in Johannesburg, South Africa.

He rose to national prominence when debuted for the Super Eagles in 1981 at age 20. The late Central Defender withdrew from the national team in 1994. He had 64 caps and scored nine goals.

As coach, he qualified an unlikely Togolese national team for the 2006 World Cup in Germany but was sacked and replaced with German Otto Pfister, just before the tournament.

He however, achieved his dream to manage a team at the World Cup when he coached the Super Eagles side to the tournament in 2014.

He is the fifth member of the glorious 1994 Super Eagles team to die, after Uche Okafor, Thompson Oliha, Rashidi Yekini and Wilfred Agbonavbare.

He is survived by four children and his mother.