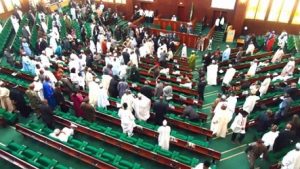 The U.S. ambassador to Nigeria, James Entwistle, made the allegation in a letter sent to the Speaker of House of Representatives, Yakubu Dogara, on June 9.

The petition says they attempted to commit rape, and solicited sex from prostitutes during their recent trip to Cleveland, United States, for the International Visitor Leadership Program.

In the petition, obtained by New Telegraph, Mr. Gololo was reported by a hotel house keeper to have grabbed her and sought sex.

Messrs Ikon and Gbillah, allegedly, sought the assistance of hotel park attendants to help them get prostitutes.

The petition read, “It is with regret that I must bring to your attention the following situation. Ten members of the Nigerian National Assembly recently travelled to Cleveland, Ohio as participants in the International Visitor Leadership Programme on good governance. We received troubling allegations regarding the behaviour of three members of the delegation to the U.S. Government’s flagship professional exchange programme.

“While the housekeeper reported this to her management, this incident could have involved local law enforcement and resulted in legal consequences for Representative Gololo. Mark Terseer Gbillah and Samuel Ikon allegedly requested hotel parking attendants assist them to solicit prostitutes.

“The U.S. Mission took pains to confirm these allegations and the identities of the individuals with the employees of the hotel in Cleveland.

“The conduct described above left a very negative impression of Nigeria, casting a shadow on Nigeria’s National Assembly, the International Visitor Leadership Program, and to the American hosts’ impression of Nigeria as a whole. Such conduct could affect some participants’ ability to travel to the United States in the future.

“While the majority of Nigerian visitors to the United States do behave appropriately, even a few Nigerians demonstrating poor judgement leads to a poor impression of the Nigerian people generally, though it is far from accurate. Such incidents jeopardise the ability of future programming and make host institutions and organisations less likely to welcome similar visits in the future.”

“I request, in the strongest possible terms, you share this message with members of the National Assembly so they understand the seriousness of these issues, and the potential consequences of their actions, not only for themselves as individuals, but also for the future of such programmes designed to benefit Nigeria,” Mr. Entwistle wrote.

The accused lawmakers denied the allegations.

“It’s an affront on the National Assembly” – Gbillah

Mr. Gbillah, who was accused of soliciting prostitutes alongside Mr. Ikon, said the allegation was a calculated attempt at rubbishing the National Assembly and vowed to demand compensation from the U.S. for defamation of character.

“So, at Cleveland Renaissance where we were, opposite the Quicken Loan Arena, the Cleveland Cavalier Basketball team played a match and many people came to lodge at the same hotel, and they claimed that we spoke with car park attendants. We didn’t go with cars, so how could we have spoken with attendants?”

“I saw the ambassador (Entwistle) and went to greet him and he told me how a few of us tarnished the image of the House. I advised him to make it formal so that we can know who was involved and what actually happened.

“It was after this encounter that they called us to their premises and said they were identified by their accusers in a group picture. This is curious. No video footage. They didn’t accost us while we were in US. We suspect this is a calculated attempt to rubbish the National Assembly. Is this how they would have investigated their congressmen? Do they know that there were other black people who came to watch the match? How could they have identified us in a picture without our knowledge?”

He said the affected lawmakers had challenged the U.S. government, demanding footage of their stay in the hotel and that they should be provided access to their accusers for identification.

Mr. Gololo, in a letter to the American envoy on June 13, obtained by PREMIUM TIMES, said “these are totally false, unfounded and baseless allegations against me. I categorically deny that any such incident happened. I never grabbed any housekeeper or solicited sex”.

“I also take this matter very seriously not only because I am an honourable member representing a hallowed institution but because I am husband and father. How will my family and in-laws react to this wild and grave allegation.”

He demanded “video or any such evidence of my alleged misbehaviour.”

Nkole Ndukwe, another lawmaker who was on the trip, expressed shock at the allegation and asked for substantiation from the U.S.

The United States Embassy in Nigeria declined comment on this story.