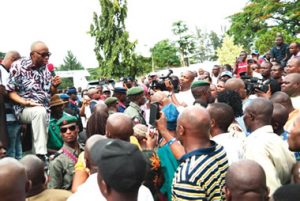 The workers commenced the industrial action last week Wednesday to protest the non-payment of their five-month salaries.

The governor, who was forced to come down from his vehicle to address the protesters, pleaded with them to suspend the strike, saying the state did not have enough money to pay the accumulated salary arrears.

Mimiko said the government was ready to pay health and local government workers and teachers, to enable it to inject some money into the state economy, adding that when health workers resumed work, they would be able to meet the medical challenges of the people.

The governor noted that his administration was considerate and not insensitive to the plight of the workers.

Mimiko appealed to them to call off the one-week old strike and considered his commitment not to retrench any worker in spite of the dwindling resources.

While saying the continuation of the strike would only retard the economic growth of the state, the governor charged the people of the state “to see the present situation in the country as a collective challenge that we must face and proffer solutions to.”

He added, “We are in a very difficult time in Nigeria and I have absolutely nothing against your protest. I can’t imagine somebody working diligently or not too diligently but worked for five months without pay, especially in an economy that depends mainly on salary.

“Your protest has been peaceful and that is what democracy is all about. People must be able to ventilate their feelings just like you are ventilating yours. But it is important for us to know the truth because it is the truth that can set us free.”

But the governor effort to convince the workers fell into deaf ears as some of them continued to shout “no salary, no work”, intermittently.

Responding to the governor’s address, the state chairman of JNC, Adeleye, declared that if the workers had no signal that the state government was ready to pay their salary arrears, the indefinite strike would continue.

Apart from the Government House, the workers also stormed major roads in Akure, the state capital, to continue the protest.

During the protest that lasted for over four hours, the workers carried placards with different inscriptions such as‘Mimiko, pay our salary’, ‘We can’t feed our families’, ‘Workers are dying of hunger’, and ‘Ise pupo, iya repete’ (much work, endless suffering).

It was learnt that the Ondo State Council of Obas, led by the Osemawe of Ondo, Oba Victor Kiladejo, had intervened in the industrial dispute as the traditional rulers were meeting with the leadership of the workers’ unions as of the time of filing this report.

Government offices, schools and hospitals were still under lock and key on Thursday as a result of the strike while the leadership of the labour unions in the state were moving from one office to the other to monitor the compliance with the stay-at-home order.

Meanwhile, following the failure of the workers to suspend the strike, the state governor and some members of the state executive council moved to the streets of Akure on Thursday to evacuate refuse by the roadside.

The governor said his action was to prevent an outbreak of disease in the town. _Nigerianeye