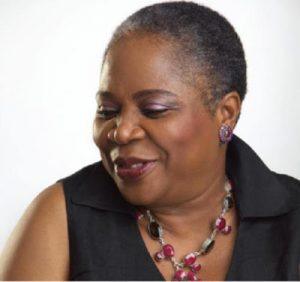 Veteran singer, actress and immediate past Director-General of the National Center for Women Development, Onyeka Onwenu, has said she will neither apologise nor pay fine to Chief Tony Okoroji.

The former DG was reacting to the judgment delivered against her by a judge of the Ikeja High Court, Justice I. O. Akinkugbe, in a suit instituted against her by Okoroji for defamation of character.

The Justice had ordered Onyeka to pay Okoroji the sum of N5m as well as tender a public apology.

But Onwenu says that the verdict was not fair and that she would appeal.

“The judgment given by Justice Akinkugbe is most unfair and cannot stand,” she told Sunday Scoop.

“Throughout the trial, the plaintiff’s lawyer kept referring to the fact that I was a member of the Peoples Democratic Party and my appointment to office as Director General of the PDP but that I was serving under an APC Government.

“My lawyer raised an objection as we did not think that my party affiliations had anything to do with the case at hand. But the judge to our consternation allowed that line of questioning.

“I am waiting to receive a copy of the judgment, at which point I will have more to say. For now, I am certain that this judgment cannot and will not hold based on the fact that we were able dismiss the allegations convincingly and unequivocally. We are appealing the judgement, of course.”

The Elegant Stallion as she is fondly called, added that she also would not apologise as ordered by the court.

“I will not apologise and I will not pay any fine. I am guilty of nothing. We have a country where one is allowed to pursue justice and, by God’s grace, justice will be served.

“If not by Justice Akinkugbe, then certainly by an Appeal Court or even the Supreme Court of Nigeria.”

“Mr. Tony Okoroji says a lot of things but he does not mean them. I shall provide a full rebuttal of the campaign of calumny that he is putting out against me in the aftermath of this judgment and more shall be revealed. I hold no personal grudge against him, my quarrels with him have always been on issues of probity and fair play.

“I have been very much there for Okoroji for so long and in many more ways than I care to remember. I respect his intellect and I’ve said so on many fora, but I will not stand by and watch him attempt to destroy the very reputation that he has found and made use of personally and officially in the past.

“Some of us left the Performing Musicians Employers’ Association of Nigeria for him to run aground, in order to avoid his trouble. He is hoping we will do the same with regard to the Copyright Society of Nigeria. That wish will not be granted.”