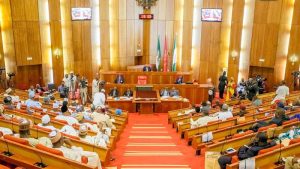 The Senate President, Bukola Saraki, has reshuffled the leaderships of the Senate’s committees.

Also, Oluremi Tinubu, a key member of the anti-Saraki Unity Forum, was named chairperson of the Committee on Environment.

Previously, she headed the Committtee on Women Affairs.

Mr. Saraki made the announcement shortly before the senate adjourned on Thursday.

Suleiman Hukunyi, another critic of the senate president, is now in charge of the Committee on National Identity.

The re-composition of the Senate committees was one of the conditions put forward by Unity Forum Senators for peace to return to the troubled assembly. _premium Times