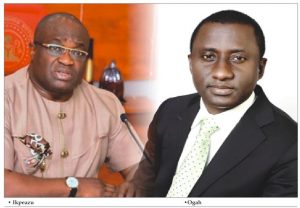 The governorship crisis in Abia State took a turn for the worse yesterday with conflicting rulings from different courts in Abuja and Owerri, Imo State.

Moments after a Federal High Court in Owerri ruled out Dr. Uche Ogah as possible replacement for the incumbent Governor Okezie Ikpeazu, Justice Okon Abang of the Federal High Court, Abuja delivered another ruling upholding the certificate of return the Independent National Electoral Commission (INEC) earlier issued to Ogah as the governor of the state

The judge also refused an application by the Peoples Democratic Party (PDP) for stay of execution of the judgment he had earlier delivered sacking Governor Ikpeazu.

He described as an abuse of court process, the two applications for stay of execution filed by the PDP, and proceeded to dismiss them.

The state’s political landscape had been torn between the supporters of Ogah and those of Ikpeazu after Justice Abang declared Ogah the authentic governor on June 27.

Acting on Justice Abang’s order that Ogah should be sworn in as governor with immediate effect, the Independent National Electoral Commission (INEC) immediately issued the latter a certificate of return.

Ogah would indeed have been sworn in as governor but for the death of former Minister of Transport, Chief Ojo Madueke, and the declaration of a holiday by Governor Ikpeazu to mourn the deceased former minister.

The court in Owerri had issued what looked like ultimate relief for Ikpeazu yesterday with its declaration that Ogah was “not eligible to enjoy the outcome of the PDP primary because he rejected the result of the primary.”

The Court also dismissed a suit filed by Chief Friday Nwosu, seeking the removal of Governor Ikpeazu for allegedly presenting a forged tax certificate to his party, the People’s Democratic Party (PDP).

Nwosu, a governorship aspirant on the platform of the PDP and participant in the party’s governorship primary on December 8, 2014, had approached the court, praying that he be declared the governor on the grounds that Ikpeazu was not qualified to represent the PDP during the 2015 governorship election.

Delivering judgment on the suit, the presiding judge, Lewis Allagoa, said the plaintiff, through his counsel, failed to justify his claim that the tax certificate submitted by Ikpeazu was forged.

Allagoa said besides looking at documents in litigation, adequate clarification and additional proof by experts were required for a forgery claim to be established by law.

On the claim that Ikpeazu was not properly taxed in 2011, the court said it was not the duty of Ikpeazu but that of the tax official to determine how he should be taxed.

The court said since the issuing authority (Abia State Board of Internal Revenue) was not joined in the suit or an expert engaged to ascertain the authenticity of the document, it would be unlawful for the court to rule in favour of the plaintiff.

On the third relief sought by the plaintiff, seeking dismissal of Ogah’s claim to the governorship position, the court ruled in favour of the plaintiff, saying Ogah was not eligible to enjoy the outcome of the PDP primary because he rejected the result of the primary by refusing to sign it and petitioning the party to conduct another exercise.

Allagoa had earlier favoured Nwosu on two other grounds—that the originating summons was properly filed and that the Federal High Court has jurisdiction to hear the pre-election suit.

Reacting to the judgment which lasted more than two hours, Dr Livy Uzoukwu (SAN), J.T.U. Nnodum and Theo Nkire who represented the Independent National Electoral Commission, PDP and Ikpeazu respectively, described it as a landmark.

Nkire specifically commended the judge for his industry in reviewing all the issues raised by parties and giving at the end a sound judgment that would be hard to fault elsewhere.

But a counsel to Nwosu, Ajayi Ilesanmi, said the court failed to consider the issues before it, vowing to appeal the judgment.

According to him, “Paragraphs 2,3,4,5 and other portions of our reliefs and affidavit evidence before the court show that he positively claimed before the court that Dr. Okezie Ikpeazu submitted false tax documents and deposed to false oath in support of his nomination form.

“Does it mean he started paying tax before he was appointed? These are some of the issues we want the Court to resolve.

“Some of the tax receipts bore serial numbers suggesting that they were paid same day while one was paid on a Saturday, which is a non-working day in Nigeria.

“We disagree with some aspects of the judgement concerning the qualification of the governor to continue to hold on to the position, but will not say further until we get full briefing from our client.

“I have no doubt that the appellate courts will vindicate us.”

Supporters of Governor Ikpeazu, who had attended the court in uniforms were seeing dancing and singing songs of victory after the judgment.

In Abuja, however, it was a reversal of fortune for the rival camps as the Federal High Court, Abuja upheld the certificate of return issued by INEC to Ogah as the Governor of Abia State.

The judge also refused an application by the Peoples Democratic Party (PDP) for stay of execution of its judgment sacking the incumbent Governor, Okezie Ikpeazu.

Justice Abang berated Ikpeazu for going before the Abia State High Court, Osisioma to obtain an ex-parte order with the intention of frustrating the execution of the judgment of his court.

Justice Abang spoke while delivering two rulings in relation to the applications by Ikpeazu and his party, the PDP for the stay of execution of the court’s judgment in the suit marked: FHC/ABJ/CS/1086/2014 and filed by a PDP member, Obasi Uba Eleagbara.

The proceedings yesterday lasted about seven and half hours, from 9am to 4:30pm.

When the case by Eleagbara was called, Ikpeazu’s lawyer, Wole Olanipekun (SAN) told the court that he was not ready to argue the application for stay of execution filed on behalf of his cleint.

Olanipekun sought an adjournment on the ground that he was new in the case and had not studied the application.

But, lawyer to the plaintiff, Alex Iziyon objected to an adjournment and insisted that the application must be argued.

Ruling, Justice Abang noted that having taken steps to circumvent the execution of the court’s judgment, the court could no longer indulge him.

Justice Abang said: “Dr. Ikpeazu slapped the court in the face; went to a different court that is of coordinate jurisdiction and obtained another ex parte order that has the effect of neutralising the order of this court.

“He slapped the court in the face, he cannot expect the court to grant him an indulgence. I so hold.

“You cannot flout an order of court and expect the court to listen to you and grant you a discretionary indulgence. It is a serious matter to slap a court.”

While dismissing the applications for stay of execution by the PDP, Justice Abang said the party’s decision to file two application at the same time was an abuse of court process.

He said: “The judgment of this court was given in favour of Dr. Sampson Ogah. One of the orders directed the PDP to forward the names of the person with the second highest votes at the PDP primary, Okezie Ikpeazu having been disqualified from con testing the primary, to INEC as the party’s candidate for the election.

“The order made against Ikpeazu was rightly made. It subsists until it is set aside on appeal.

“There is no issue of stay of execution. The judgment having been enforced by INEC, there is nothing to stay.

“The judgment has been executed, certificate of return has been issued in favour of Ogah as Governor of Abia State.

The judge awarded N40,000 cost against PDP to be paid to Ogah before it could take any further steps in the case.

Earlier in relation to the case by Ogah, the judge elected to suspend further proceedings on the application for stay of the judgement in the case filed by Ikpeazu.

The judge said his decision to stay further action in the case pending appeal, was informed by the concession by Iziyon that the appeal filed against the judgment had been entered at the Court of Appeal and that records of appeal had been compiled.

The judge said he would have proceeded to hear the applications pending before his court, including the one by Ogah, which sought to set aside the order made the Osisioma High Court, but for the concession of Iziyon that the appeal having been entered, the trial court should stay all actions.

Justice Abang, who drew a distinction between when a trial court could or could not stay proceedings because appeal had been entered at the Court of Appeal, said where it was an appeal against a final judgment, the trial court has the jurisdiction to hear an application for stay of execution.

He relied on the provision of Order 7 Rule 3 and 4 of the Court of Appeal Rules to hold that a trial court could only stay proceedings where an appeal is entered at the Appeal Court if such an appeal was on an interlocutory decision.

Justice Abang further held that where the decision appealed against was a final judgment of the trial court, such a court has the jurisdiction to first determine an application for stay of execution before such application is filed at the appellate court, where the trial court refuses it. -Nigerianeye

Fireworks gentle up Sydney as Asia takes first step into 2018