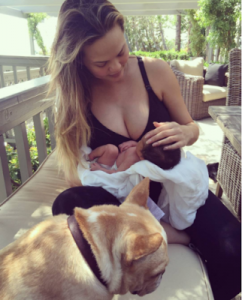 Chrissy Teigen just showed that she is just like every other red blooded mum, after she grabbed her little girl, Luna and ran half naked out of their hotel during a fire drill.

The model’s mother, Vilailuck Teigen, took to Twitter to share an hilarious photo of Chrissy wrapped in bed linings while grasping Luna to her midsection during the fire drill at the Bel Air hotel where they are presently lodged.

She later shared a goofy video on Snapchat, Thanking fans for their ‘prayers’, saying:
“We just want to thank you all for your prayers and your well wishes. We’re ok… feeling pretty blessed.”

UUTH resident doctors: We can’t work without been paid