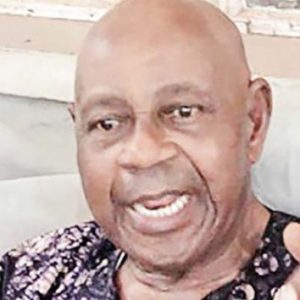 David-West also said: “I pre­pared myself for this interview because for a virologist to chal­lenge a Nobel Laureate, a profes­sor of Comparative Literature, on English word, it’s like committing suicide. But I will not commit sui­cide.”

The Nobel Laureate, Pro­fessor Wole Soyinka, said recently that the sover­eignty of Nigeria is nego­tiable. How would you ap­praise the comment?

Wole Soyinka should know much than I do as a virologist. I have evidence to support what I have said. I read the story in which he said the sovereignty of Nigeria is negotiable when I was in Abuja. I am very annoyed about it.

I know what Wole Soyinka said, with greatest respect, is absolutely not true. In case I am wrong, I have to phone some friends to get their opinions. I went back to the library and got five dictionaries to get the meaning of sovereignty. They are Black’s Law Dictionary (1999 Edition), Oxford Thesaurus (2001 Edition), Collins Dictionary (21st Century Edition), Oxford Il­lustrated Dictionary, and B.B.C. English Dictionary.

Wole, of course, will agree that he over-spoke. What he said was not correct, it is not true. Nige­ria’s sovereignty is not negotiable. Anything that is sovereign can­not be negotiated. .Sovereignty implies and conjures supremacy, absolute. You don’t negotiate ab­solute.

Great scholars wrote Ameri­can Constitution. They made one mistake that has been standing for 200 years. They said in the intro­duction, in order to have a more perfect union, we have decided to do so, so, so, so. I phoned an American friend, I told him that the founding fathers that wrote the constitution were great men, but they cannot have something that is more perfect. Perfect is absolute. You cannot have more perfect. You cannot qualify perfect. When something is perfect, it is perfect. There is no half of quarter perfect. It is absolute. So, any sovereignty is not negotiable because it is ab­solute.

The problem here is that we should separate between concep­tion and socio-political problem. Conceptually, there is no way you can negotiate sovereignty. But if it comes to socio-political con­sideration, what you are going to negotiate is not sovereignty, but modus vivendi. How you can live together can be negotiable, but it is impossible to negotiate the sover­eign state of Nigeria. It is impos­sible. It is not negotiable.

When I saw the headline of the story: ‘Nigeria’s sovereignty is negotiable, says Soyinka,’ I said it was possible that Wole Soyinka was misquoted. But I did not want to fall into the category of the people I call headline readers. So, many Nigerians are headline read­ers. They only read the headlines, they don’t read the substance. The headline may not be the same as the substance. So, I don’t want to be a headline reader and criticise. I read the story through and I be­came more annoyed. The headline was right. The full text quoted him that he said so. But the long and short is that no sovereignty is ne­gotiable.

Going through the story in which Professor Wole Soyinka was quoted to have said Nigeria’s sov­ereignty is negotiable, would you not rather say he was being figurative, because he said ‘we bet­ter negotiate it, not even at meetings, not at con­ferences, but everyday in our conduct towards one another?’

He cannot be figurative. Wole should know much better now. He cannot be figurative with some­thing as grave as that. That is triviality and I know, he is a very serious person. He is not figura­tive, he meant it, if you differen­tiate between conceptual aspect of sovereignty and geo-political aspect. Now, Wole Soyinka was taken away by geo-political, which is about decentralisation of the nation. Decentralisation of the country is completely different from loss of sovereignty. Decen­tralisation of the nation has to do with modus vivendi, how do we live together.

For few days, people have been talking about restructuring the country. But what is wrong with Nigeria is not structure. It is the people themselves. Somebody had written to the Guardian from Ilo­rin, he completely misunderstood what I said. There is no situation that is perfect. A state organisa­tion like the country is dynamic.

Now, our modus vivendi, how we live together; can we look at it and change it? Yes, I agree. Why do I say so? What people are complaining of is not by the Constitution of Nigeria. The point they are making is that the centre is too powerful, that the states are not powerful. It is not due to the constitution. It is because of the la­ziness and weakness of Nigerians. The constitution is very clear that Nigeria is a federal state. In a fed­eral state, the centre is weak. The centre cannot dictate to the states. (The United States President, Barack) Obama cannot dictate to any state in America.

I have just discovered that until few months ago, some states were still flying the confederate flag, which was illegal. After the civil war of America, confederate flag, like the Biafra flag, was still flown in America and Obama could not touch them.

It is like saying that some East­ern States in the country are flying Biafra flag and Nigerian President cannot do the same thing that American President will do. The state is powerful in America.

But in Nigeria, why are the states so weak?

The strength of the centre is due to the weakness of the states. The equation is clear. Why are the states weak? Why can’t the state government complain through people? Why they cannot talk is because the states always go to Abuja, which has become a Santa Claus to them. Each governor likes to be in the good book of the President. So, they cannot criticise the President legally. You would go and beg him, he gives you money and you keep quiet.

What steps would you say should be taken to en­sure devolution of power to the states?

Very simple. In the United Kingdom, there is this problem be­tween Scotland and Britain. They have been fighting for hundreds of years. Scotland put in for inde­pendence. But what did the British Government do? They gave Scot­land more power and they kept quiet. The parliament in London controls whatever they do in Scot­land and they protested. Instead of breaking up, the British Parlia­ment gave Scotland more power. That quelled it a bit. When they went to referendum, they failed because what they wanted, they had gotten it already.

It is the same thing here. It is very simple. The state governors should have the gut and if they don’t have the gut, they should resign. They have governors’ forum. The forum should not only protest for money, it should take the Federal Govern­ment to court that the system we are operating is too centralised, which is against the constitution. Mr. President swore to protect Ni­geria and defend the constitution. All the governors swore to protect the constitution. They can tell the President that what he is doing is against the constitution. You are taking more power from us more than what you need. I am sure the court will rule in their favour. They will win the case. The gov­ernors are afraid to do that because secretly they depend on the petro­leum money from the centre.

If you have television in your house, you sat down, a thief opens the door, takes your television and you don’t do anything. You run to the street and start shouting they have taken your television; why can’t you stop him from tak­ing your television? It is the same thing. The state governments can stop the Federal Government from taking more powers.

Sir Frederick Lugard did a won­derful job by joining the north and south in 1914. Who was Lugard working for? He was working for the Royal Niger Company. He was told to merge the north and south for administrative convenience. Lugard was not here to create a nation. He did the job. Then, Lu­gard was promoted to be a knight.

In elementary chemistry, there is what we call amalgam and compound. Lugard was to create an amalgam of geographical ex­pression and he did. In chemistry, amalgam is when you put one and two together – A and B. But there is still distinction between A and B. When A and B make a compound, the product is a com­mon product. With this analogy, amalgam is what we have. nation is what we don’t have. Everybody is talking about tribe and ethnicity. If we are a nation, we will not talk about tribe and ethnicity again. We will be talking about Nigeria. Nigeria has not become a nation, not because of the constitution but because of the people. Don’t blame Lugard, he was not here to build a nation. To be a nation is a spiritual thing and it requires com­mitment of the people. The prob­lem with Nigeria is that we have never been committed spiritually to the concept of one Nigeria.

What role can the mass­es play in order to ensure true federalism in Nige­ria?

Sovereignty belongs to the people. The masses have a lot of things to do. But protests in Nige­ria are always half-hearted. After independence, Britain wanted to have Military Base in Nigeria. It was known as Anglo Nigeria De­fence Military Pact. The parlia­ment wanted to pass the bill. But students from University College Ibadan matched to Lagos, and stopped Tafawa Balewa from do­ing it. This is to show the power of the masses. The protest was led by the then President of the Stu­dents’ Union Government, Abide Babalola. It is disheartening that he has not even been given any national honour.

Also, the masses showed the role they can play during the struggle for the June 12, 1993 presidential election and the Oc­cupy Nigeria Protest led by Tunde Bakare and others when former President Goodluck Jonathan in­creased pump rice of petrol.

Professor Soyinka was also quoted to have said he did not understand former President, Chief Olusegun Obasanjo, and the incumbent, President Muhammadu Buhari, on the calls for restructuring of the country. What is your take on this?

The problem I have with propo­nents of restructuring is that what they have in mind is demise of Nigeria. That is not the solution. Our magic to defence is the con­stitution. If we stay by the consti­tution, anyone that goes against it, we should go to court to challenge him or her. What is Nigerian Bar Association (NBA) doing? The NBA should lead this crusade.

Whatever is going to happen will be an amendment of the ex­isting constitution, which is 1979 Constitution. Every of the recom­mendations must go through con­stitutional amendment. In the next 10 years, they are still on it.

You have always been mentioning 1979 constitu­tion, you were part of the people that drafted it. But you have not been mak­ing reference to the 1999 Constitution. Why is it so?

The Nobel Laureate also said the response of Mr President to the attacks by the Fulani herdsmen has not been strong. What is your take on this?

What did Buhari do that is weak? Fulani herdsmen have been grazing their cattle in Port Harcourt for a very long time and there was no problem. Why should there be problem now? Bu­hari has condemned the attacks. But what I don’t like is when you said there should be grazing land for herdsmen in every state. I as an Ijaw fisherman will also say give us fishponds in every state so that we can come and fish. Our water is being polluted by oil. We cannot fish again. And we make all the money for the country. -The Sun