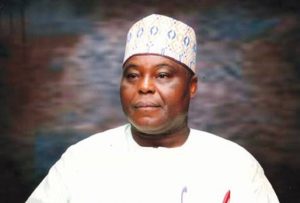 Raymond Dokpesi and his team arrived Conference Hotel, Sagamu at about 8.00 p.m. on Friday to seek the support of a former Ogun State governor, Gbenga Daniel.

At the hotel, Mr. Dokpesi sought Mr. Daniel’s support to secure the votes of the Ogun State delegates at the upcoming Peoples Democratic Party, PDP, convention.

Speaking after Mr. Daniel treated him and his team to a dinner, Mr. Dokpesi said the visit was to ask for his host’s support in view of his influence in the Ogun PDP.

The founder of Nigeria’s first private radio station said he and Mr. Daniel enjoyed a friendship that has existed for over 40 years.

‘We shall rebuild the party together,” he told his host. “I am at home in Ogun State. We have been friends for over 40 years and I believe when the time comes I will have the best votes from Ogun State.”

The aspirant said he was convinced Mr. Daniel would not run against him for the position of National Chairman as being insinuated.

A possible hindrance to Mr. Dokpesi’s ambition, however, could be his corruption trial.

Before his prosecution, he was arrested and detained for weeks by the Economic and Financial Crimes Commission, EFCC, for allegedly receiving N2.1 billion from the office of the embattled ex-National Security Adviser, Sambo Dasuki, prior to the 2015 general elections. The money is believed to be part of the mismanaged billion dollar funds earmarked to purchase weapons for the military, in a scandal now known as #Dasukigate.

Mr. Dopkesi has denied any wrongdoing.

Upon his arraignment, the politician was granted bail by Justice Gabriel Kolawole of the Federal High Court for N200 million and two sureties.

Shortly after he regained freedom, Mr. Dokpesi disclosed his intention to run for the PDP national chairmanship seat and promised to roll out strategic programmes that would restore the party to its glorious days.

He said he would formally unveil his 10-point programme at the August 17 National convention in Port-Harcourt.

On Friday, Mr. Dokpesi’s host, Mr. Daniel, said he was ready to support the revival of the party.

Without making any commitment of support, Mr. Daniel wished his guest luck, saying what was paramount to him was strengthening the party.