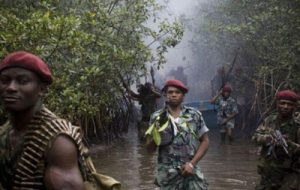 The DSS said this in a statement on Friday.

The ‘Avengers’ are the militant group responsible for recent attacks on oil installations in the Niger Delta.

According to the secret police, one Selky Torughedi, a suspected member of NDA and associate of Tompolo, was arrested for planning to assassinate a serving military officer in Kaduna state.

It said another suspected member of the NDA was arrested while planning to carry out attacks on oil installations.

“In a bid to stem the activities of vandals in the Niger Delta, this service effected the arrest of Selky Kile Torughedi, on 17th June, 2016, in Calabar, Cross River state,”the DSS said in the statement issued by Tony Opuiyo, its agent

“Torughedi is an ex-militant and suspected member of the Niger Delta Avengers (NDA), and was arrested for planning to assassinate one MB Yahaya, a serving military officer.

“Torughedi, who is a close associate of Government Ekpemupolo (aka Tompolo), had already conducted surveillance at the residence of Yahaya in Kaduna, preparatory to his plot when he was intercepted. He is also fingered as a sponsor of pipeline vandalism in some states in the south-south region. Suspect is currently assisting the service, with critical leads.”

He said that in a related operation, the service arrested one Christian Oluba aka Sensor, another suspected militant with the Niger Delta Avengers (NDA).

“Sensor was arrested while perfecting plans to carry out explosive attacks on critical oil and gas pipelines, including critical storage points,” he said.

Also “arrested” was a member of the Indigenous People of Biafra (IPOB), who was planning, alongside his colleagues, to carry out attacks on the Computer Village in Lagos.

“Meanwhile, sequel to increasing threat posed to public peace by the activities of the Independent People of Biafra (IPOB), this Service arrested one Chidiebere Onwudiwe, a graduate of Mechanical and chemical engineering and known member of IPOB, on 22nd June, 2016.

“Onwudiwe and his associates within and outside the country were planning to carry out coordinated attacks against religious bodies/edifices, police-check points and the computer village in Ikeja, Lagos state, with Improvised Explosive devices (IEDS). The suspect was apprehended while making logistics supplies for their nefarious plan.” -Nigerianeye