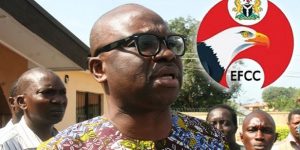 The Economic and Financial Crimes Commission (EFFC) has released the full detail of its fraud case against Governor Ayodele Fayose of Ekiti State.

The governor’s N1.299 billion bank account has been frozeen. He is in court contesting the order, which the EFCC has defended. The case is coming up September 30 at the Federal Gigh Court, Ado-Ekiti.

The agency did not state how much kickback Fayose got, but it named some contractors who allegedly paid him.

Besides, said the EFCC, the properties were qcquired in other peoples’ name, among them the governor’s sister, the EFCC said.

In an affidavit in support of its freezing of Fayose’s account, the EFCC said.

The EFCC said: “That apart from fraudulently retaining the sum of N1, 219,490,000.00 being part of the N4, 745,000,000.00 stolen from the treasury of the Federal Government through the office of the National Security Adviser, the Applicant (Fayose) has also received gratification in form of kick back from various contractors with the Ekiti State Government, such as Samchese Nigeria Ltd, Tender Branch Concept Nig. Ltd, Hoff Concept Ltd, Calibre Consulting Ltd.

“That the Applicant received these kick-backs and gratification through Still Earth Ltd and Signachorr Nigeria Ltd.

“That, in turn, the Applicant (Fayose) instructed the Still Earth Ltd and Signachoor Nigeria Ltd to use the funds to acquire properties for him.

“ That in complying with the Applicant’s instruction, Still Earth Ltd and Signachoor Nigeria Ltd acquired properties on behalf of the Applicant in the name of a company known as J.J. Technical Services Ltd belonging to the applicant and his wife. Attached and marked Exhibit EFCC 08 are copies of the deeds of assignment for the said properties.

“That the Applicant also used the name of one Mrs. Moji Ladeji (the applicant’s sister) to acquire a property situate at No.44, Osun Crescent Maitama Abuja from the proceeds of the alleged offences of receiving gratification and kick.”

The agency opened up on how N1, 299,490,000.00 was wired into Governor Ayodele Fayose’s accounts by one of his associates, Abiodun Agbele, who collected the slush funds from a former Minister of Defence, Mr. Musiliu Obanikoro.

Obanikoro ferried the cash to Akure Airport in a chartered aircraft with Registration No: HS125-800 5N-BMT belonging to Gyro Air Limited.

But Agbele retained N263million on the instruction of the governor.

The mansion is located at No.44, Osun Crescent Maitama Abuja, one of the posh districts in the Federal Capital Territory.

These disclosures were contained in an affidavit deposed to by an Investigating Officer, Tosin Owobo, in the Federal High Court, Ado-Ekiti.

The affidavit revealed the blow-by-blow account of how the EFCC traced the arms purchase funds from the Office of the former National Security Adviser (NSA), Col. Sambo Dasuki (retd.) to Fayose’s accounts.

The affidavit was in response to an application by Fayose to the court praying for the de-freezing of his accounts by the EFCC.

The anti-graft commission said it took action after “receiving a damning oral intelligence report showing that the 2nd Respondent herein (Zenith Bank) was in custody and in fact had in its possession the sum of N1, 299,490,000.00.”

The affidavit reads: “That contrary to the paragraphs 5-16 of the Applicant’s Affidavit in support of the Originating Summons, I know as a fact that the 1st Respondent received an oral damning intelligence report showing that the 2nd Respondent herein was in custody and in fact had in its possession the sum of N1, 299,490,000.00 (One Billion, Two Hundred and Ninety Nine Million, Four Hundred and Ninety Thousand Naira) being proceeds of economic and financial crimes.

“That upon the receipt of this intelligence, the Commission analysed it and found same to be worthy of investigation.

“That so far our investigation has revealed as follows: That between the 5th and 17th day of June, 2014 the former state Minister of Defence, Mr. Musiliu Obanikoro, in grand conspiracy with the Applicant and the former National Security Adviser, Col. M.S Dasuki (retd.) fraudulently removed the sum of N2,260,000,000.00 from the account of the office of National Security Adviser which sum was fraudulently transferred to a company known as Sylvan Mcnamara Limited with account No. 0026223714 domiciled with Diamond Bank Plc. Attached and marked Exhibit EFCC 01 is copy of the mandate of the account belonging to Sylvan Mcnamara Limited and the extract of inflows from the Office of the National Security Adviser to the said account.

“ That the principal signatory to this account is one Ibrahim Babajide Obanikoro, the son of the said former State Minister of Defence Mr. Musiliu Obanikoro.

“That on the receipt of these proceeds of crime, Mr. Musiliu Obanikoro, fraudulently conveyed the sum of N1,219,490,000.00 (One Billion, Two Hundred and Nineteen Million, Four Hundred and Ninety Thousand Naira) to Akure for the use of the Applicant.

“That on the 17th day of June, 2014 Mr. Alade Oluseye in the company of one Abiodun Agbele, a front of the Applicant, went to the Akure Airport wherein they took cash delivery of the sum of N724,500,000.00 from Senator Musiliu Obanikoro and his acclaimed Aide-de-Camp Lieutenant Colonel A.O Adewale.

“ That the total sum of N 1, 219,490,000 was conveyed to Akure Airport by Senator Obanikoro through a chartered aircraft with Registration No: HS125-800 5N-BMT belonging to Gyro Air Limited.”

The EFCC also confirmed how Fayose instructed, Agbele to transfer the N1, 299,490,000.00 into various accounts.

The commission said: “That on the 19th day of June,2014, after Mr. Alade Oluseye took delivery of the money being the proceeds of crime, Mr. Abiodun Agbele, the front of the Applicant, received an instruction from the applicant to collect the money and made cash deposit in the sum of N219,000,000.00 to De-privateer Ltd account No. 1013835889 domiciled with the Zenith Bank Plc. Attached and Marked exhibit EFCC 02 is a copy of the statement of account of DE- Privateer Ltd domiciled with the 2nd Respondent.

“That on the same day, Abiodun Agbele made another cash deposit of N300million being part of the proceeds of crimes to the said De- privateer Ltd’s with the 2nd Respondent(Zenith Bank)

“That on the 23rd June, 2014, N200million, being part of these proceeds of crime, was also deposited to the said De-Privateer Ltd’s account domiciled with the Respondent by Biodun Agbele whilst acting in concert with the Applicant.

“That on the 26th day of June,2014, the said Biodun Agbele on the instruction of Applicant further dissipated the proceeds of crime by depositing N137,000,000.00 into account No. 1003126654 domiciled with the 2nd Respondent in the name of the Applicant. Attached and marked exhibit EFCC 03 is a statement of account of the said account domiciled with the Respondent.

“That in further dissipating the proceeds of crime deposited and retained in the account referred to in paragraphs (d) and (g) above, the sum of N300,000,000.00 was put in a fixed deposit account No. 9013074033 in the name of the Applicant on the 7th day of April,2015. Attached and marked as exhibit EFCC 04 is a copy of the statement of the said account.

“That this N300, 000,000.00 (three hundred million naira) is still in the account. That on the 17th day of June, 2014, Abiodun Agbele made another cash deposit in the sum of N100,000,000.00 being part of this proceeds of crime to a company known as Spotless Investment Ltd with account No. 1010170969 domiciled with the 2nd Respondent. Attached and marked as exhibit EFCC 05 is a copy of the statement of account of the said Spotless Investment Ltd.

“That we have interviewed Mr. Alade Oluseye Sunday and his colleague Lawrence Akande and have informed us in writing about how these transactions were conducted. Attached and marked exhibit EFCC 06 and 07 are copies of their statements.”

Part of the cash was lavished on a property at No. 44, Osun Crescent, Maitama, Abuja, which was bought in the name of Mrs. Moji Ladeji ( Fayose’s sister)

The EFCC said it decided to freeze Fayose’s accounts in line with its mandate in Section 34 of its Establishment Act.

It also said it followed due process in freezing the accounts by applying to a court for an order of interim attachment.

The commission said: “That the chairman of the Economic and Financial Crimes Commission, in the exercise of his statutory mandate contained in Section 34 of the EFCC Act, having satisfied himself that the various sums of money in the account No. 1003126654, 9013074033, 1010170969 and 1013835888 domiciled with the 2nd Respondent were made through the commission of the an economic and financial crimes, to wit: stealing and receiving gratification approached the Federal High Court Lagos Judicial Division, for an order directing the manager of the 2nd respondent to freeze the said accounts.

“That in his wisdom, Hon. Justice M.B Idris granted the 1st respondent’s application wherein an order of interim attachment was made on the aforementioned accounts. Attached and marked exhibit EFCC 09 is a certified true copy of the said order.

“ That the said order was a preservative order to prevent further dissipation of proceeds of crimes.

“ That I was informed by Rotimi Oyedepo Iseoluwa of counsel in our office, 15A, Awolowo Road, Ikoyi, Lagos at about 8:40 p.m. on the 2nd day of July,2016 and I verily believe him as follows:

“That the 1st Respondent is statutorily empowered to investigate all economic and financial crimes in Nigeria.

“ That it is within the statutory powers of the 1st Respondent to preserve exhibits and proceeds of economic and financial crimes during investigation for possible prosecution.

“That the Applicant cannot use this Honourable Court as a shield against criminal investigation. That the order of interim attachment was neither directed at nor instituted against the Applicant.

“That whilst the Applicant enjoins immunity against civil and criminal proceeding being a serving governor, proceeds of an economic and financial crimes allegedly committed by the Applicant do not enjoy such privilege.

“That the 1st Respondent has the power to direct the 2nd Respondent to place a stop order on any account if it discovered in the course of its duties that such accounts are suspected to be involved in any crimes. That the Applicant will not be prejudiced should this application be dismissed.

“That it will serve the course of justice to refuse this originating summons.. That I make this counter affidavit in good faith, knowing and believing the facts deposed herein to be true and correct and in accordance with the Oaths Act of Nigeria.” -The Nation