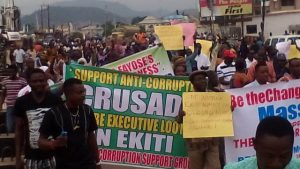 A massive crowd of protesters on Thursday took to the streets of Ado Ekiti, calling on Governor Ayodele Fayose to answer corruption allegations against him.

Accusing Fayose of looting the state treasury, the protesters, comprising the opposition All Progressives Congress in Ekiti, the Conference of Nigerian Political Parties, youths, artisans and traders among others, demanded the prosecution of the governor.

Specifically, the CNPP asked the 17 members of the Ekiti House of Assembly, alleged to have falsified their certificates, to submit themselves for prosecution.

The Economic and Financial Crimes Commission has frozen the governor’s accounts with Zenith Bank and some of his associates after allegedly tracing part of the N4.7bn arms funds from the Office of the National Security Adviser under Col. Sambo Dasuki (retd.), to them and two sons of a former Minister of State for Defence, Musiliu Obanikoro.

The protesters displayed placards with various inscriptions, including ‘Fayose is not above the law’, ‘Impunity is not immunity’, ‘EFCC, please probe Fayose’s account in Access Bank’; ‘Fayose bring back Ekiti money’, ‘Fayose must go’, ‘Immunity not a licence for criminality and impunity’, and ‘Fayose is destroying our image, we are honourable people.’

Security operatives from the police, the Department of State Services and the Nigerian Security and Civil Defence Corps were deployed in the state capital to forestall a breakdown of law and order.

They marched from Fajuyi Park through Okeyinmi and stopped at the Ijigbo area of the state capital, where they were addressed by leaders of each group.

Commending President Muhammadu Buhari for his anti-graft war, the protesters called on the EFCC to probe the finances of the state and prosecute those who were found culpable in the looting of the state’s treasury.

They chanted anti-government’s songs to deride the governor, whom they alleged had been looting the treasury, especially the N1.2bn found in his account; and alleged collection of kickbacks from contractors handling various projects in the state to buy multi-billion naira properties in Abuja, Dubai and Lagos.

The Deputy Chairman of APC in the state, Mrs. Kemi Olaleye, accused the governor of hiding under immunity to perpetrate impunity in the state.

“We are tired of immunity clause; immunity has become impunity in Ekiti. We condemn Governor Fayose’s corrupt tendencies. Things must change. The EFCC must do its job and ensure that looters of Ekiti are brought to justice,” she stated.

A statement presented by the Ekiti CNPP Chairman, Mr. Tunji Ogunlola, asked Fayose to waive his immunity and face prosecution for his alleged involvement in the N4.7bn arms deal.

The CNPP added, “On the issue of the Ekiti State House of Assembly, we ask the 17 members to face prosecution. It is very unfortunate that their primary roles have been abandoned for Fayose’s defence.

“We also plead with the Federal Government not to release bailout for the payment of salary to Governor Fayose. The Federal Ministry of Finance should pay into workers’ accounts directly because we have lost confidence in the government. The previous N9.6bn bailout should be probed.

“We want to commend the (acting) Inspector-General of Police, Mr. Ibrahim Idris, and the Director-General of the Department of State Services, Mr. Lawal Daura, for probing alleged political thuggery levelled against the Peoples Democratic Party government in Ekiti.

“We also want a special force to be deployed in Ekiti to maintain peace in Ekiti State because our lives are no longer safe.”

A students’ representative, Samuel Olaoluwa, commended the anti-graft agency for coming up with comprehensive details on how Fayose allegedly looted Ekiti, saying nothing must be spared to ensure that all the funds were recovered and culprits prosecuted for the state to move forward.

Reacting through his Chief Press Secretary, Idowu Adelusi, the governor said the “APC protesters” asking him to wave his immunity, were doing so out of “ignorance and desperation to win the state in 2018.”

He added, “But it is a failed agenda abinitio because we are ever ready for them on a daily basis like soldiers guarding the entrance to a military formation. They should know that this is 2016 and not 2006.

“Their whole agenda is about 2018 and their game plans are what we are now seeing, using the EFCC to concoct lies and using the media to disparage Governor Fayose; but they can’t go far.”

Adelusi advised those against the governor to wait till 2018 for him to submit himself to the EFCC as he did in 2007.

He stated, “Till now, even the political EFCC has not alleged Fayose of stealing Ekiti money and if it is concocting one, we shall meet in court at the appropriate time.

“It is very shameful that these protesters have not asked their boss, (Kayode) Fayemi to account for the SUBEB N852m fund he misappropriated or tell Ekiti people why, within four years he landed the state in a valley of debt and what he did with the huge loans he took from the capital market and commercial banks.”

“As far as we know, no amount of harassment or intimidation or character assassination will make members of Ekiti State House of Assembly to succumb to pressure to go against the Governor. The legislators know that their governor has not done any wrong thing.” -Nigerianeye