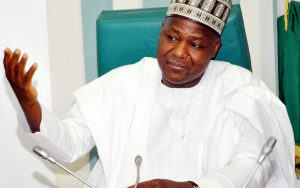 The House of Representatives, will on Thursday meet with outgoing U.S. Ambassador to Nigeria, James Entwistle, over the sexual misconduct allegation against three legislators.

Investigative public hearing on the scandal begins on Thursday and Mr. Entwistle is expected to provide video clips of the incident, officials said.

The incident allegedly occurred during the International Visitor Leadership Programme in Cleveland, Ohio, U.S. held between April 7 and April 13, attended by 10 members of the lower chamber.

The Chairman of House Committee on Ethics and Privileges, Rep. Nicholas Ossai (PDP-Delta), told the News Agency of Nigeria (NAN) in Abuja that the committee did not invite the management of the hotel where the alleged misconduct occurred.

According to him, we decided not to extend invitation to the hotel management since the Ambassador who broke the information through a letter to the speaker has documentary evidence against the three lawmakers.

The three lawmakers involved in the allegation are Mohammed Gololo (APC-Bauchi), Samuel Ikon (PDP-Akwa Ibom) and Mark Gbillah (APC-Benue). They allegedly solicited sex from prostitutes and grabbed hotel housekeeper in a bid to rape her.

He said the committee did not carry out any secret investigation, and urged anyone with useful information to submit same to the committee on or before commencement of the hearing.

“The standard in the U.S. is that an accused is assumed innocent until proven guilty and that is the same standard in Nigeria. Anyone who has evidence can now see the committee,” Mr. Ossai said.

Mr. Dogara had last month expressed regrets over the trending report on the allegation against the three lawmakers, especially on social media.

The Speaker was quoted by his Special Adviser on Media and Public Affairs, Turaki Hassan, as urging Nigerians to refrain from passing judgment and wait for the outcome of investigation by the parliament.

“Judgment can only be passed when an allegation is proven,” he had said.

Mr. Dogara also vowed that the house would investigate the allegation, saying that, “together with the US Embassy in Nigeria, we will get to the bottom of this matter”.

He had pointed out that apart from the U.S. Ambassador’s letter, no evidence had been forwarded to his office, and that there could be no conviction without a trial.

He also indicated that the lawmakers had said that they were prepared to defend themselves at their own cost.

NAN reports that the House Committee on Ethics and Privileges handling the investigation postponed the public hearing from Monday to Thursday.

The postponement, according to Mr. Ossai, is to enable some members of the committee who travelled to perform their religious obligation in Mecca to return to Nigeria.