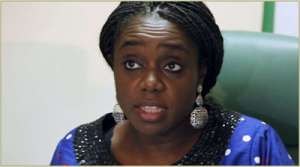 The Minister of Finance, Mrs Kemi Adeosun, on Thursday assured that though Nigeria was technically in recession, measures were being taken to ensure a rebound of the economy.

The minister made this known when she appeared before the Senate to brief it on fiscal policies being put in place to ameliorate the sufferings of Nigeria.

She reiterated the commitment of the present administration to coming up with policies to address the problems confronting currently Nigerians, particularly the poor. According to her, the Federal Government has made capital release of N248 billion from the 2016 budget as part of efforts to get the economy going.

“Technically, in economic terms, we have had two periods of negative growth; we are in a recession but I don’t think we should dwell on that.

“The most important thing is that we are going to get out of it. “Our social intervention projects have been funded to provide relief to the poorest. Every local government will be touched by that programme and we will continue to get out of it. “While Nigeria lives in one of the toughest times, we are confident that the strategies we are deploying will get us out of the problems we inherited.

“Those strategies are about being disciplined about government spending to reduce wastage and leakages to ensure that we invest in infrastructure that is needed to create jobs and growth in this economy,’’ she said.

“On capital releases done so far, N248 billion has been released so far, with another N16 billion to be released imminently.

“Transport has received N22 billion compared to just N6 billion for the whole of last year. “The extent of our release shows government’s seriousness about reviving this economy and we are confident that the work we are doing will bear fruit; we are already beginning to see increased production in agriculture,’’ she added.

Adeosun said that all government plans to reposition the economy in spite of drop in oil price and other challenges were consistent with promises made at the inception of the administration.

While admitting that Nigerians were going through painful adjustments, she reassured that the Federal Government was on the right track and that no money was being wasted. “Many of our revenues will come in quarter three of the year. For example, most companies’ year ends in December.

So, it is from September they will begin to pay their taxes. “I am very confident that we will do very well, at least we will do over 60 per cent based on our projection, but I think our revenue will be better if the economy sustains its trajectory.

“In our releases, we have tried to prioritise capital projects. For instance, works ministry needs to have their money during the dry season because during the rainy season work stops.

“In terms of agriculture, we are focused on providing low cost farms to support agriculture. There is zero per cent duty on importation of mechanized farm equipment.

“For infrastructure, we are revisiting the Public-Private Partnership (PPP) projects arrangements that have failed and trying to see where we can resolve them.

“This is important because no matter how much government spends, it is not enough to bridge the infrastructure gap, therefore we need private money.

“One of the reasons why impact has been fairly limited is the issue of arrears.

“We inherited significant contractual arrears. Though we have paid contractors, they are finding it very difficult to return to sight but we are addressing those through the Debt Management Office,’’ she said.

On social intervention projects, the minister said that N14 billion had been released for capital expenditure like recruitment of teachers and school feeding, among others.

Adeosun, who said that Nigeria remained the largest economy in Africa, expressed optimism that the economy would make significant improvement. In his remarks, the President of the Senate, Dr Bukola Saraki, said that Nigerians were expecting the executive to live by its promise to better their lot.

He said that the senate, on its part, would continue to monitor the level of implementation of the 2016 budget, while engaging the minister on a periodic basis for further briefings on the state of things.

Saraki said “she has made some commitments; let us wait and see and hold her to those commitments.’’ -Nigerianeye

Kate Henshaw warns Akpororo: Do not take my smile for stupidity