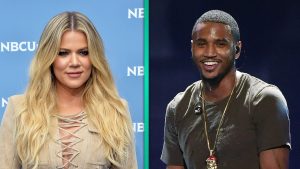 The “Keeping Up With the Kardashians” star attended the “Slow Motion” singer’s concert Saturday in Las Vegas and was later spotted getting cozy with him in a club.

And from the looks of it, the R&B hottie, a longtime buddy of her famous family, is no longer in the friend zone.

After his set, an insider told the news outlet that the pair went to Drai’s Nightclub where they “were spotted making out in the early morning hours.” Songz has a residency at the trendy venue.

The rumors started after the singer attended Khloe’s 32nd birthday bash last Monday at a Los Angeles Dave & Busters, where they were caught leaving together and being very touchy-feely.

Songz, born Tremaine Neverson, has known the family for years.

In 2014, he and Chris Brown partied with Khloe’s half-sisters, Kylie and Kendall Jenner.

Khloe previously dated Houston Rockets player James Harden and was married to Lamar Odom, who she recently filed for divorce from for a second time. -ET Online