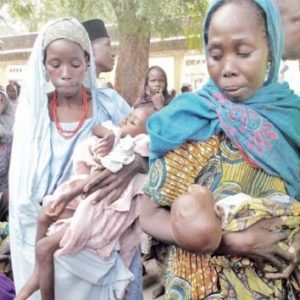 HAJARA cuddled her five year-old-boy, Mohammad like a baby as her husband and relations surrounded her.

At five, Mohammed, like his peers was expected to be run­ning around the camp but his frail look won’t allow him. His skinny body and unkept hair are indications that all was not well with the boy. “He is suf­fering from acute malnutri­tion,” a relief worker from the state emergency management agency affirmed. Hajara’s fam­ily’s condition gives a clue to the conditions of many of the Internally Displaced Persons (IDPs) in Borno’s central town of Bama.

“This boy won’t eat, he can’t even walk, he’s dying,” her mother lamented as this re­porter approached the frontage of her make-shift home among the ruins of the Bama General Hospital, where they are cur­rently taking refuge with 25, 000 other victims of Boko Ha­ram attacks in the area.

Adjacent to Hajara’s tent, a man in his 60s sat on a mat. He beckoned to the reporter. He attempted to utter few words but his strength failed him. On a closer look, one could count the ribs on his chest especially when his worn-out kaftan fell off his thin shoulder. Close to the elderly man was a middle-aged woman, also seated on a mat along a passage leading to the northern axis of the camp.

This above scenario is com­mon at the Bama even though the authority had evacuated 1,800 malnourished persons with their families to a treat­ment centre in the capital, Mai­duguri. Officials say children are more affected by hunger though statistics of the affected were not made available as at press time. At least, 17 others were evacuated early last week when a presidential team led by the Special Adviser to the president on Social Investment, Hajiya Maryam Uwais visited the camp.

Until August 2014, Bama, the second largest town in Borno State with a population of over 269,986 people and estimated land cover­age of about 4, 997 square km, according to 2006 Census, was a centre of commerce and agricul­ture.While residents of the town and headquarters of Bama local government area trade in cotton, textile, hides and skin with busi­ness partners from neighbouring Niger, Chad, Cameroon and some­times Central Africa Republic or Sudan, inhabitants of the com­munities engaged in subsistence farming especially, grains and nuts. The invasion and capturing of Bama on September 2, 2014 by Boko Haram however, changed the course of the people’s lives. A proud people known for their industry and commerce were sud­denly held captive for close to seven months. While thousands of residents in the town fled to Maid­uguri, the state capital, some 65 km away, others at the local areas were not so lucky. “They were trapped in Boko Haram’s hands before they were rescued in March 2015 by the Nigerian troops,” says Col­onel Adamu Laka, Brigade Com­mander, 21 Armoured Brigade, Nigerian Army, Bama.

Joyfully, the liberated people as­sembled remnants of zincs from burnt buildings, cut down stems of Neem trees to erect new “homes” within the sprawling premises of the hospital with little or no con­sideration for hygiene and other conveniences. Some of the IDPs revealed that under Boko Haram, foods were in short supply. Of­tentimes, they were given food after the insurgents would have subjected them to psychologically torture. “Our foods finished but we couldn’t go out to buy or farm. At times, Boko Haram would give us small quantity of food after they had threatened to kill us,” Baba Ka’aji recalled to Saturday Sun.

Bama which is situated close to Sambisa enclave was largely inac­cessible as military operations were still going on there. This made ef­fective intervention by the National Emergency Management Agency (NEMA), state relief agency, human­itarian agencies and other NGOs a difficult task as they had to be escort­ed from the capital to offer support to the IDPs at the camp controlled by the military, Borno Commissioner for Health, Dr Haruna Mshelia dis­closed. “IDPs camps are usually controlled by national relief agency in collaboration with the government of the affected states, international and humanitarian organizations but the peculiarity of Bama’s location kept her under the control of Nige­rian military,” he added.

Build up to starvation

With food items in short supply to the deprived Boko Haram hostages, malnourishment was the end result and it hit the IDPs hard. The visit to the camp by a Nigerian beauty therapist and philanthropist, Modupe Ozolua whose NGO is intervening in the deplorable conditions of the IDPs in the state, revealed the grav­ity of the humanitarian crisis in the North East state but the statement is­sued by the Doctors Without Borders (Medecins San Frontieres) brought the crisis into world reckoning. For once, Nigeria is experiencing a med­ical crisis that ravaged some Asian nations or east African countries like Somalia, in the aftermath of devas­tating wars. MSF, in the statement claimed that about 24, 000 IDPs at Bama camp are in dire health condi­tion with at least, six to eight refu­gees, mostly children, dying daily. The report, according to a govern­ment source, angered President Mu­hammadu Buhari who immediately summoned Borno governor, Kashim Shettima for explanation especially against the backdrop of series of sup­ports and/or relief materials deliv­ered to the state by some organiza­tions, individuals and governments.

Malnutrition, according to medi­cal experts, occurs as a result of faulty nutrition or when foods con­sumed lack basic nutrients of vita­min. “It can also be caused by star­vation,” says a medical officer in a Borno State hospital who preferred anonymity. “It develops when the body system does not get the right amount of nutrients, minerals or vita­mins needed to grow and to maintain healthy functioning of body organs,” the official added. The symptoms, according to the medic, are sudden loss of weight sometimes 10 pound or more in a week, dry or skin pale or rashes, tender bones and weak­ness. The hairs may also become thin or sometimes pull out easily or occasional bleeding from the gum. “In fact, it is a faster killer. I mean severe malnutrition can kill within short time,” he said.

A recent report by the UK-based Children’s Investment Foundation put the statistics of children suffer­ing from acute malnutrition in the world at 17.3 million with Africa and Asia having highest cases. Another report claimed Nigeria has the high­est number of malnourished children of about 1.4 million. Senior Special Assistant to the President on IDPs, Dr Mariam Masha described the situation as unacceptable. She said the Federal Government was ready to tackle the challenge head-long by providing needed food for the IDPs and other affected persons.

Presidential aide, Maryam Uwais said the situation in Bama can be overwhelming for any government but assured urgent attention will be given by the government. She dis­closed that the president directed them to visit Bama to “assess the situ­ation and report back immediately so that the Federal Government can be informed and take decision.”

“We’re here on the instruction of President Buhari. The Federal Gov­ernment is going to provide water here and review the food supply,” she said.

Borno State government has taken six truckloads of food items to the camp as soon the news of cases of malnutrition broke, Gov Shettima said. This was confirmed by Modupe Ozolua in her tweet shortly after her visit early June. She said that Borno deputy governor; Alhaji Usman Durkwa delivered the items. Army brigade commander, Col Laka also disclosed that more foods have been delivered to the camp. But then, the foodstuffs are usually of the same nutrients, says a health worker in the camp. “The state government has been trying because it is not easy to feed over one million IDPs every month especially now that there is no money in the country (talking of economic challenge). The problem is that these foods are usually the same thing: spaghetti and rice, all carbohy­drates. Even other donors bring the same. This is just one of the problems because the diets are not balanced. Therefore, the risk of malnourish­ment may be higher,” the source who is a nutritionist, told Saturday Sun.

A camp set on time bomb

Besides malnutrition, which MSF alleges, killed many of the IDPs in a month, poor hygiene within the camp could set the IDPs on a time bomb. Sanita­tion is near zero as fewer toilets provided by the government are in a sorry state. The offensive odour oozing out of the camp is a pointer to the poor attitude of the IDPs to hygiene. The camp itself is located within the premises of a burnt hospital with the chal­lenge of inadequate water supply as daunting as ever. “Government has provided four boreholes in the camp,” says NEMA North-east coordinator, Mohammad Kanar but the water table in the area is slowing down the pressure to get water up to the reservoir. This often results in hours of long queues, scrambling for water and occasional disagreement among children and mothers. Member, representing Bama Central in the state House of Assembly, Hon Baba Mala described the situa­tion as very pathetic although he could not state clearly if he had made any serious efforts at get­ting legislative support to address the problem.

Also with the rainy season al­ready on and occasional sand­storm in the area, there were fears some of the makeshift abode of the IDPs may be blown off. NEMA says government has ap­proved the construction of 500 tents. No doubt, the Federal and State government have demon­strated clear intention to salvage the situation but many of the IDPs said that they want the interven­tion to be timely in order to save more lives. “Government should assist us in time. We don’t want to suffer more, we don’t want to bury more people,” says Aji Mele, as he gazed at a burial site within the camp overlooking his tent. -The Sun