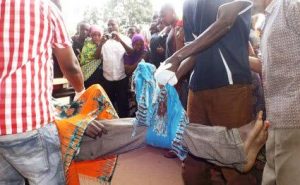 A 32-year-old man from Karanja village in Matuga Sub County, Kenya committed suicide after a person he owes Sh2500 reported him to police.

On Monday, July 4, which is the deadline for him to pay the debt or risk being arrested, Gideon Njema, who was a waiter at Rehema hotel in Kwale Town, used a wire to hang himself.

According to the hotel owner, Mbwika Nzuki, Mr Njema was served with a letter from the police on Monday morning and he promised to pay the amount by 3pm.

Mr Nzuki said at 3:30pm, the deceased excused himself from work before official time only to be informed of his employee’s demise on Tuesday morning.

“According to me the main reason for his action is the money and the fact that the matter had been reported to police,” Mr Nzuki told reporters on Tuesday.
The hotel owner identified the man who was owed as a Mr Mutunga who works at the office of adult education and who is a regular customer at the hotel
He disclosed that before the incident occurred Mr Mutunga asked him whether Mr Njema had been paid his salary and unknowingly he told him the salary was paid long time ago.
“I normally pay them Sh5000 per month but there are those who prefer to be paid on weekly basis or after every two weeks but he preferred to be paid during the end of the month,” he said.
The deceased landlord, Edward Mtitika, he was informed about the incident by neighbours who saw blood flowing from the door openings, said he was a peaceful man.
“This incident has taken us by surprise because he has been staying here for more than 5 years and all along he has been coexisting so well with others,” Mr Mtitika said, adding that the deceased recently came to his house and asked for Sh100 to visit his ailing father whom he said had been hospitalized at Kinango hospital.
Matuga OCPD Patrick Oduma, who confirmed the incident said investigations have been launched to ascertain the cause of his death. The body was removed and taken to Msambwei referral hospital mortuary. -Daily Nation Kenya

Mary J. Blige will get a star in Hall of Fame