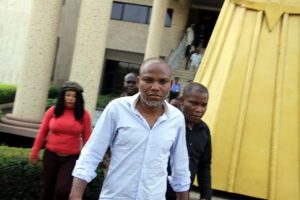 The Movement for the Emancipation of the Niger Delta (MEND) announced yesterday it had reached an agreement with the federal government (FG) on the release of Henry Okah, his younger brother Charles and Obi Nwabueze as well as Nnamdi Kanu and other Biafra agitators, on the condition that they renounce their campaign.

The group, in an update on its peace talks with government, said freedom was also on the way for Edmund Ebiware who is currently serving a life sentence.

Spokesman for President Muhammadu Buhari, Malam Garba Shehu said last night that the Presidency was yet to receive report of the agreement, while Defence Minister Mansur Dan-Alli, on a visit to Bayelsa State, could not rule out force against recalcitrant militants if dialogue fails

MEND in an online statement yesterday by its spokesman, Jomo Gbomo, said “Thus far, the deliberations have been fruitful. Various concessions and guarantees have already been secured some of which include, but are not limited to: release of Henry Okah, Charles Okah and Obi Nwabueze; review of the life sentence handed to Mr. Edmund Ebiware, based on a proposal put forward by the Aaron Team representative for Abia and Imo states, Senator Adolphus Wabara, conditional release of IPOB leader, Mr. Nnamdi Kanu and others, if they renounced their agitation for a Biafra Republic.”

Henry Okah, a MEND leader, is currently serving a jail term in South Africa for illegal gun running while Charles Okah is in prison custody from where he is standing trial in connection with the 2010 Independence Day bobming in Abuja.

Kanu, on the other hand is remanded in prison by a court which is trying him for treason related charges.

MEND added yesterday that its agreement with government stipulates that wanted Government Ekpemupolo (aka Tompolo, ex-militant leader from Delta State) “shall not be arrested, harassed and/or intimidated whenever he makes himself available as a delegate of the MEND Aaron Team 2.

“That international arbitrator and conflict negotiator, American Dr. Judith Asuni shall be accepted as the representative of the Niger Delta Avengers on the MEND Aaron Team.

“That the criminal charges against Urhobo freedom fighter, Mr. Kelvin Prosper Oniarah, shall be reviewed.

“That the life sentence which was handed in 2008 to seven soldiers, who actively supported the Niger Delta struggle be reviewed under the Presidential Amnesty Programme.

The group said it and government “will jointly and separately take proactive steps to rescue and secure the region in the event that the recalcitrant Niger Delta Avengers continue on their senseless and politically-motivated path of attacks on the country’s oil assets.

“While ‘Operation Crocodile Tears’ is aimed at ensuring the combat readiness of the Nigerian Army in amphibious and internal security operations in the Niger Delta, as well as check criminal activities like kidnapping, pipeline vandalism, piracy and other forms of criminal activities spearheaded by the NDA in the region, MEND’s ‘Operation Moses’ is essentially to inform, educate and generally sensitise the citizenry in the Niger Delta, particularly the government, the youths, oil companies, elders and militant community on the need to ceasefire and support the President Muhammadu Buhari’s administration in its determined bid to proffer sustainable solutions to the current Niger Delta crisis.”

It urged all states, local governments, oil and gas companies and law-abiding citizens in the Niger Delta to “go about their lawful and legitimate concerns, without any iota of fear, stressing that it had received firm assurances from the Federal Government that ‘Operation Crocodile Tears’ was an innocuous exercise in the national interest.

It said its ‘Operation Moses’ would be anchored by the Aaron Team 2 Dialogue, Peace and Development Initiative, jointly led by a former Minister of Foreign Affairs, Odein Ajumogobia, SAN and King Alfred Diette-Spiff, the Amanyanabo of Twon-Brass in Bayelsa State.

The militant group said: “Operation Moses shall commence with a visit by the distinguished members of the Aaron Team 2 to President Muhammadu Buhari at the State House, Abuja between August 22, 2016 and August 26, 2016.

“Thereafter, the Team shall hold sessions with top executives of major indigenous and international oil and gas companies operating in Nigeria, including the Nigerian National Petroleum Corporation (NNPC) on August 29 and 30, 2016 in Abuja. The focus of the sessions shall include local content development, Petroleum Industry Bill (PIB), Corporate Social Responsibility (CSR)/host community relations, etc.

“On September 5 and 6, 2016 in Abuja, the MEND Aaron Team shall hold sessions with the top echelon of security agencies in Nigeria and the top management of the intervention agencies in the Niger Delta: Ministry of Niger Delta Affairs, Niger Delta Development Commission (NDDC) and the Presidential Amnesty Office. The Minister of Justice and Attorney-General of the Federation is expected to personally attend these sessions. The focus of the sessions shall include extension of presidential amnesty to certain categories of political prisoners in Nigeria, fundamental human rights, NDDC Act in focus; Presidential Amnesty Proclamation 2009 in focus; collapse of federal infrastructure in the Niger Delta, Calabar-Lagos rail line and the East-West Road among others.

Asked to react to the development yesterday , Senior Special Assistant to the President on Media and Publicity, Mallam Garba Shehu said: “I know that the National Security Adviser, Gen. Babagana Monguno and the Minister of State for Petroleum Resources, Dr. Ibe Kachikwu are involved in talks with Niger Delta groups.

“But as I speak with you, the National Security Adviser is yet to receive any copy of the agreement . I am yet to establish contact with the Minister of State for Petroleum Resources to find out the update at his end.”

However, Defence Minister Mansur Dan-Alli on a visit to Yenagoa, the Bayelsa State capital declared that the Federal Government could not rule out force against the Niger Delta Avengers should peaceful dialogue fail.

The minister who was accompanied by the Chief of Defence Staff, Gen. Abayomi Olonishakin and the Commander, Operation Delta Safe, Rear Admiral Joseph Okojie said his visit was to assess the operational capability of the armed forces in the zone.

He said: “One of the cardinal objectives that brought us here is to look for peace. But we are also preparing in case the peace and negotiations are not favourable.

“We are also on our own side making all the necessary security arrangements so that there will be peace in the Niger Delta.”

When reminded of recent statement credited to the military that they could not rule out the use of force if the current peace process with the Avengers failed, the minister reiterated, ‘We cannot rule it (force) out’.

“We know our rules of engagement, we cannot use forces like that without any mandate. So, collateral damage does not come in here. As far as I am concerned, we are just trying to stop criminality in this general area.”

On his part, Olonishakin said the military has a constitutional duty to ensure that there is peace.He advised those destroying the country’s critical infrastructure to put on their thinking cap and come to the negotiation table.

The CDS said: “We have allowed truce to ensure that whoever that wants to come to talk can be given the opportunity, then while giving the opportunity, we also ensuring that our troops are in position to make sure that the truce is well implemented.

“However, we want to tell those who are sabotaging the critical infrastructure that they have to put on their reasoning cap and ensure that they come to the negotiation table and discuss.” -Nigerianeye