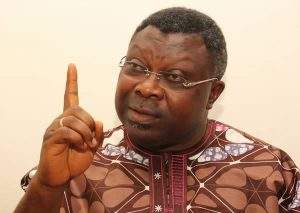 The Economic and Financial Crimes Commission has arrested a former Deputy Governor of Osun State, Senator Iyiola Omisore, who was declared wanted about a month ago.

It was learnt that Omisore was arrested in his Abuja home on Sunday morning as part of investigations into the N4.7bn that was siphoned from the imprest account of the Office of the National Security Adviser in 2014.

The commission had alleged that Omisore received about N1.3bn from the money during the build-up to the August 9, 2014 election in the state.

Omisore had, however, denied the allegations and even sued the EFCC for defamation.

The spokesman of the EFCC, Wilson Uwujaren stated that Omisore was being elusive and refused to report to the Commission after invitation was extended to him on April 7, 2016 requesting him “to come and make clarification on the ongoing investigation”.

Instead of responding to the Commission’s investigation Omisore had approached the Federal Capital Territory High Court for the enforcement of his fundamental human rights, Uwujaren stated.

However Justice Husseini Baba Yusuf consequently ordered that Omisore should only be arrested through a due and legal process, Uwujaren said. -Nigerianeye