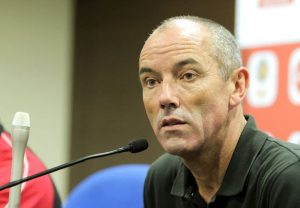 The NFF also announced that interim coach Salisu Yusuf had been appointed full time as the Chief Coach, and will assist 52-year old Le Guen.

Le Guen won 17 caps as a player for France, and turned out as both player and manager for Paris St. Germain. The Super Eagles won’t be Le Guen’s first African job, after he led the Indomitable Lions of Cameroon to the 2010 World Cup.

Backroom staff Imama Amapakabo and Alloy Agu will retain their positions as assistant coach and goalkeeping coach respectively, according spokesman of the Technical and Development Committee, Paul Bassey.