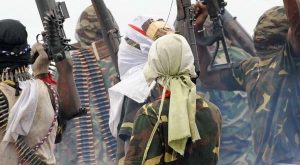 The Niger Delta Avengers (NDA), the militant group responsible for attacks on oil installations in the country, on Wednesday said Federal Government has been “negotiating with fraudsters”.

Insisting that it has not entered into any agreement with the federal government, the group also distanced itself from recent violent incidents in the south-west.

NDA also said that contrary to the claim of Garba Shehu, senior special assistant to the president on media and publicity, made in an interview, the group has not killed “a single policeman” all through its operation.

‘Out of the blue, a group calling itself the Niger Delta Avengers, NDA spouts. They kill soldiers and policemen. They kidnap and kill oil company workers. Piracy on the high seas,” Garba Shehu said in an interview.

“They asked oil companies to stop operations and pack out of the Niger Delta region. They attack and kill prominent individuals, ransacking homes up and down the coastal areas, including lately, Lagos and Ogun states. All these for what?’”

But responding, the group said: “We don’t know where Mr Garba shehu and General Babagana Munguno, the National Security Adviser are getting their information from.

“We want Garba Shehu to go and get his record straight. Niger Delta Avengers have not killed and kidnapped oil workers, we are not into sea piracy, and we have never killed policemen. The Buhari-led government knows the people attacking soldiers and killing policemen.

“It’s their sleeper’s agents that are doing it, so they should stop tagging Niger Delta Avengers to killing, kidnapping, ransacking of policemen, soldiers and individuals in the region.”