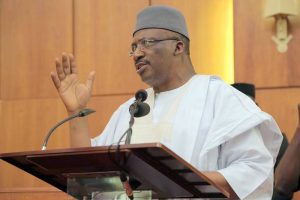 President Buhari has come under attack over reports suggesting his government may have deliberately doctored the latest report of the presidential arms audit panel.

The reports have cast doubt on the integrity of an administration that repeatedly defined honour and transparency in public service as part of its cardinal objectives, critics said.

Mr. Buhari set up the investigative panel three months after he assumed office to help uncover fraudulent practices that might have occurred in the procurement of arms for the military between 2007 and 2015.

While the committee has so far uncovered monumental corruption in military procurement, indicting many political and military bigwigs, critics say there were strong indications the government doctored the latest probe report.

At issue is the suspicion that the government may have removed the name of the Interior Minister, Abdulrahman Dambazau from the report to shield him from prosecution.

Many Nigerians also took the debate on social media platforms to express anger, with some of them questioning the president’s integrity.

Some critics also believe the Chief of Army Staff, Tukur Buratai, who served briefly as Director of Procurement, Defence Headquarters, from February until May 2014, should also have been indicted.

Below are some reactions sourced from our website and social media. (Some of the comments were edited to correct spelling, syntax, grammatical or typographical errors.)

“I will be highly disappointed if these two generals are left out of this probe, but we will wait and see how they can wiggle their way out if other actors are arrested and tried. A thief is a thief, no matter what part of the country they come from. My President, your integrity and honour are at stake here.”

“All Buhari is interested in is the investigation of his enemies while he shields his friends. Burutai, who all his life has been a soldier, earned enough salary from FGN to own properties in Dubai?”

“If this report is true, it raises alarm with the way things are done with this administration and should be corrected immediately. This is where a serious and reliable Senate would come in and do their constitutional duty. But, as we all know, they are fighting for their own personal survival to hold on to power. They are failing us in every which way they can. The admin should also respond to this news. ASAP!”

“Buhari is a disappointment .Hypocrite. Shame on you! I supported this government because I wanted corruption stamped out but with this selective prosecution, I have no respect for you anymore. I was happy you started fighting corrupt people but leaving out this type in your government, and in fact, appointing that man in the first place is an indictment on your socalled integrity.”

“This story will return one day. If nothing is done before then, it will be the coffin of Buhari’s vaunted integrity.”

“At some point, we have to come back and talk about how the @MBuhari government doctored that arms probe report and took out Dambazau’s name