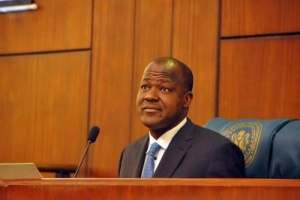 The Speaker of the House of Representatives, Yakubu Dogara, has expressed shock over the wicked manner some leaders looted the nation’s treasury, saying they now hide their loot in farms.

Dogara, who lamented that no conviction had been secured so far against the looters to serve as deterrence to others, said, in an interview, that there was need to reassess the way the anti-graft war was being waged to ensure the rule of law was followed.

He also urged support for the President’s anti-graft war. He said: “If you look at the massive looting of the treasury, actually, I have been in government for quite some time, I never, never could have imagined the scale of corruption that we are witnessing, where people took lots of money running into billions and buried them in farms.

“As we speak, they are recovering monies from someone’s farm somewhere around Abuja. It is very unfortunate, where people stole money just for the sake of stealing. If you were the one who was in charge of fighting corruption, you would have even been shocked by the scale of the problem.

“I guess part of the problem we have is that the scale of the problem far outweighs the anticipation of the agencies. So, if care is not taken in the process, we may not get things right. They will have to keep their heads level to be able to be in charge of this fight and do it effectively.”

Dogara, who also spoke on a host of burning national issues, lamented that there had not been a major conviction in the last one year. His words: “You will recall that the fight against corruption is one of the cardinal promises that Mr President made before assumption of office. He had cause to say that we have to kill corruption before corruption kills us and I know he is committed to fighting corruption to a stand still.

“The process of doing that has become a subject of concern to some people. The EFCC is actually the agency, as we all know, that is in charge of this fight and if you look at what it has done so far, there is even a discussion as to whether they are proceeding in the right direction and whether it is not time for us to sit down and do an assessment of how the fight has been, in view of the fact that in the last one year I do not think there has been any major conviction. “And it has always been a case of this person has been arrested and detained and some things have been done or he has been charged to court and then the story ends there.

Whether we will succeed in fighting corruption, if we continue in this way, only God knows. “If the end is just to arrest people, charge them to court and, thereafter, nothing happens, no one is convicted; because conviction, even if you are not jailed, has a way of deterring people. The fact that you are carrying that negative appellation as a former convict has the potential to deter people from corruption in the future. “But if I am just arrested, charged to court and maybe some money recovered from me and at the end of the day, nothing happens, a lot of people may not be deterred in the future from engaging in corrupt practices.”

The speaker disagreed with claims that the war against corruption was selective, stressing that naturally, the war would revolve around those who had the opportunity to serve in government at the centre.

He said: “If we are talking about corruption, naturally, it will relate to those that had opportunity to serve in government. You will recall that, especially, the PDP had been in power for a number of years, more than a decade and if you were to weigh members of opposition that are in government now and had opportunity to serve, those that would have tendencies to engage in pilfering of resources, majority will come from PDP, except we are not being realistic.

“Though we can’t claim that all the members of APC are saints, you pointed out that APC spent money in the course of the campaign, but where did this money come from? Because as it is, we haven’t really had any facts about government officials forwarding money to the cause of the campaign. “Majority of the money that was stolen was channelled towards the PDP campaign. You know that this arms purchase monies, for instance, virtually everything was given for the prosecution of PDP campaign.

“I do not think a dime went to any member of the APC, we were all in government then. I can’t remember a discussion like that then but I knew when some of the funds were being given to some of our friends as well but I believe that no one that is of APC stock was given that money. “The whole thing was scripted. I don’t think the fight has really been one sided. If you recall, one of the closest aides to the President, I don’t want to name him, when he was picked up, everyone was shocked that that man could be picked up. “He had been one of the most dutiful, one of the people that is very, very close to the President, yet he wasn’t spared when evidence was adduced that he benefited from it and he had to refund the money.”

On Senate President, Bukola Saraki’s allegation of government within Buhari’s government, Dogara said: “The Senate president has his own sources of information, he is a close watcher of development of government, he has been in the system far longer than myself and so, for him to have made this allegation, it means he had seen certain things or certain trends that lent credence to what he said.

“In my case, I cannot say that I have seen a situation where a cabal that sits in government can make a decision. I don’t know, but I believe that since he is the one that said it, he will be in a better position to throw light on this. “He has said there is a cabal, that there is a government within a government, so I believe that in due course, he will educate us more, throw light onto it and maybe we can unveil the cabal. That is a job journalists can really do effectively.”gara

On the issue of Grazing Bills, the speaker said: “My take on this is very simple. I have had cause to talk to some of the promoters of these bills to say hey, there is this unhealthy discussion about these bills in the National Assembly, so let’s just halt and have a small group of people that will take a look at some of these issues from the contributions of Nigerians and let’s advice ourselves before moving on and as it is, that is where we are.

“We want to listen to opinions of our citizens and at the end of the day, it is government of our people, we are going to do what majority of our citizens want and not what a few want to be done. As the House of the people, we cannot run away from it, so ultimately, it is the will of the people that will triumph in this matter, so right now, we have halted all further processes on these bills.’’

On the achievement of the APC government in the last one year, Dogara said: ‘’One year may be a small period of time for us to begin to assess the progress of this government. ‘’We have not even started implementing the budget in its true sense and that will be done after procurement processes are over. That is one of the challenges that we have have on ground.” -Vanguard