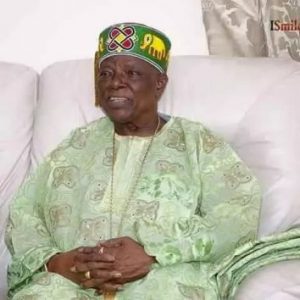 SORROW hung over Sag­amu, the political head­quarters of Remoland, Ogun State, like dew, yesterday, as news of the death of the paramount ruler of the town, Oba Mi­chael Adeniyi Sonariwo, Erinjugbo broke.

Palace sources told Daily Sun that the paramount ruler died in a London hos­pital on Saturday at about 1.00pm duing a brief ill­ness. He reportedly trav­elled to the UK five weeks ago where he had a surgi­cal operation a fortnight ago for an undisclosed ill­ness.

The late Ogun monarch, who was the chairman of the Council of Obas and Traditional Rulers, was installed Akarigbo on July 14, 1990 as successor to Oba Moses Sowemimo Awolesi, Erinwole II, who reigned between 1892 and 1988.

A Fellow of the Institute of Chartered Accountant, Oba Sonariwo, who was born in Ita Eleye, Lagos in 1936, was the 18th promi­nent traditional ruler of Sagamu.

Already, security opera­tives including policemen have been deployed in the town as well as the palace and private homes of the monarch to avert any like­ly breakdown of law and order.

All entrance gates to the palace were locked, while residents of Sagamu were seen in groups discussing the passage in whispers.

The late Akarigbo be­came an orphan at the age of six, in 1942, after his fa­ther, Prince Michael Adey­emi Sonariwo died on Au­gust 28, 1924 having lost his mother earlier. He later became successful in life through hard work, dedi­cation to duties and what he called element of luck.

Both the state govern­ment and Akarigbo-in- Council are expected to make official announce­ment of the passage within the next few days after cer­tain rites of passage would have been done.

“I can tell you that our revered Akarigbo has joined his ancestors, like those before him, but the Akarigbo-in-Council must perform certain rites be­fore his passage could be officially made.” -The Sun