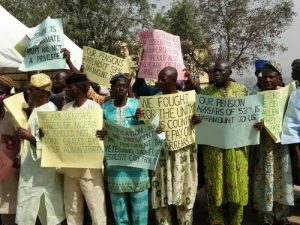 Barely two weeks after striking civil servants in Ogun state locked out the state governor, Segun Mimiko, from office over unpaid 5 months salary, aggrieved pensioners in the state yesterday locked the state Commissioner for Finance, Adewale Osinowo, inside his office at the government house at Oke-Mosan, Abeokuta, over their two months unpaid pensions.

The pensioners, under the aegis of the Association of Local Government Pensioners in the state, stormed the office complex and demanded to see the Commissioner. When he refused to come out and attend to them, the pensioners forced their way into the government house and locked the entrance into his office.

The pensioners said they were angry that the state government had refused to pay them their May and June pensions. According to them, about 60 members of their association had died in the last few weeks owing to the non availability of their pensions. The commissioner later attended to them and promised that their pension would be paid immediately.