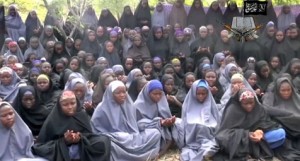 The Presidential Fact-Finding Committee on the abducted female students of Government Secondary School, Chibok, Borno State has asked the Federal Government to take advantage of foreign support, backed with hi-tech equipment, to locate the abducted girls and rescue them.

It called for the beefing up of arms and ammunition of the military as well as the strengthening of security agencies in the theatre of operation.

The committee made the recommendations in its 50-page report submitted to the government, according to Premium Times.

The 27-member panel chaired by Ibrahim Sabo, a retired brigadier general, was inaugurated by former President Goodluck Jonathan on May 6, 2014, to, among other things, find out the circumstances leading to the abduction of the 276 female students of the Government Secondary School, Chibok, Borno State on April 14, 2014 by Boko Haram terrorists.

The establishment of the committee followed claims and counterclaims about the circumstances and the actual number of students abducted by the terrorists.

The panel submitted its report to then President Jonathan, but its details were never made public.

In the report, the committee, which sat for five weeks, said altogether 276 students out of the 395 female students that registered for the WAEC examination were abducted by the terrorists.

It further stated that while 57 of the students escaped from the insurgents after the abduction, the remaining 219 were unaccounted for.

It said five of the 57 students that escaped were found in the bushes near Damboa.

It said at the time the girls were abducted, the school was relying on extant security arrangement and had only two guards while there was no electricity because its only generator had broken down.

The panel said intelligence available to it at the time it was submitting its report to government showed that the girls were in different camps in and around Sambisa Forest, which covers an area of 60,000 square kilometres with scrubby semi desert tangle of low trees and bushes in the corner of the Northeast zone.

“The abducted girls have been split into groups under the watch of separate syndicates as confirmed from various sightings of the insurgents at different locations,” it said.

“Another batch of girls is believed to have been transported by canoe to an Island around the Lake Chad.

“Insurgent attacks on communities and markets situated in Hyuum, Askira Uba LGA, Klakaisa and Sha’awa villages of Damboa LGA in search of food and other supplies, indicate that some of the girls could be within the area.”

It explained that the negotiation initiative would require dialogue with hostage-takers through trusted intermediaries and conflict mediators. The military option would involve the deployment of counter-terrorism and/or hostage rescue team, which would undertake a surgical strike storming the locations where the hostages are held.

It listed the advantages and disadvantages of the two options.

The panel told the government that in determining which option to adopt, the advantages and disadvantages of each approach should be carefully examined in the context of the hostage crisis and new developments.

“The negotiation initiative is inclusive while the military option is exclusive to the team that would be involved in the rescue operation,” the Committee said.

Citing the successful release of the 52 U.S. officials, who were held hostages for 444 days at the U.S. Embassy in Tehran, Iran from 1979 to 1981, the committee listed the advantages of the negotiation approach to include a greater likelihood of rescuing the girls alive and safe from harm and the provision of an opening to broader discussions and understanding that would eventually lead to a peace agreement.

On the other hand, the committee said by adopting the military option, Nigeria would have, among others, complied with the internationally accepted norms of non-negotiation with terrorists; boost morale within the country and among the security agencies; and send a strong message to the insurgents that the government was not weak.

It, however, noted that the constraints of the option were insufficient number of mobilised troops; inadequate combat equipment (power, mobility and communication); porous/unmanned borders with Cameroun, Chad and Niger Republics, which provide the insurgents the advantage of safe haven, access to mercenaries and weapons; and time constraints in the procurement process for combat equipment.

Stating that most of the people it interacted with during its fact-finding work did not consider the military option advisable “in order to protect the abducted girls,” the committee said should the government decide to adopt the approach, a thorough assessment of the strength and capability of the military and the Boko Haram insurgents must be undertaken.

It suggested that the assessment of the military should be in the areas of personnel, equipment, the terrain, logistics and state of preparedness of the rescue team at the conflict site and in geographical location for possible reinforcement.

For the insurgents, it said, “there should be an appreciation of their supply route, personnel, fire power, camouflage tactics and guerrilla war strategy”.

The committee said from its findings the insurgents are armed with sophisticated military hardware such as Armoured Personnel Carriers (APCs), Anti-Aircraft (AA) guns, Rocket Propelled Grenades (RPGs), among other weapons.

It said: “The sophistication of their equipment has emboldened the insurgents leading to an increase in the frequency and intensity of their attacks. The Nigerian military and other security agencies should be provided with additional and superior weapons to counter the insurgents.”

The committee also recommended that the military should review its rules of engagement to appropriately counter the insurgents.

It asked the government to also co-opt the Youth Volunteer Group, otherwise known as Civilian JTF and the Shuwa tribe into the search and rescue of the Chibok girls.

2018 will likely be pivotal to our change agenda, says Buhari