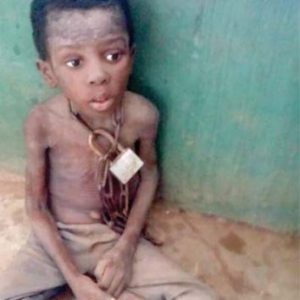 Pastors have descended on Francis Taiwo, the pastor of the Key of Joy Celestial Church who chained, Korede, his nine-yearold son for several weeks. They said his action was satanic.

Taiwo, who was arrested yesterday told the police that he took the action because he believed his son was possessed with a ‘stealing spirit’ known in Yoruba language as ‘emi ole’

The Prelate of the Methodist Church Nigeria (MCN), Dr Samuel Chukwuemeka Kanu said the action was devilish. Dr. Kanu, who spoke through the church’s Director of Media and Public Relations, Rev. Oladapo Daramola, said that not everybody that called themselves men of God should be regarded as same.

He said the story was very disheartening and should be thoroughly investigated by the police. “There are many wolves in sheep clothing, the action of this pastor has nothing to do with Christianity. His action is very unreasonable”, he said.

Administration of Obafemi Awolowo, Ile-Ife, Dr. Apeloko David, “this action is alien to the new dispensation of grace.

Thus, it is ungodly, absolutely barbaric and it betrayed human conception.” Pastor Akinade Olusegun of Mountain of Fire Miracle Ministry, called for his arrest. The fact that someone has a pastoral title does not mean he has the calling of God. He should appear in court as soon as possible. No sane parent could do this, let alone someone that answers to the name of God. I would call on the authorities to carry out a thorough investigation on the matter, including the involvement of his wife,” he said.

Pastor Oluwashina Joshua of the Resurrection and Life Ministry, Atan Ogun State, also condemned the pastor’s behaviour as devilish and anti-Christian deed of the endtime.

He wondered the call of God on the acclaimed cleric. “In as much God said we should not judge, I am not comfortable with the man being addressed as a pastor. It is demeaning that a supposed pastor, who should look after the flock in his care, could act in such a satanic manner.

This person in question could be a cultist for all you know if well investigated. Otherwise, it defiles logic how a parent could tie down his own biological child for weeks, and refused to feed him.”

Pastor Wisdom Chukwu of Wisdom Worldwide Evangelical Mission, Lagos, said the man should not be called a pastor. He said such an act was the height of man’s inhumanity to man.

“He is not fit for that title of pastor.

He should be a ritualist wearing the garb of a pastor as a disguise. A Church is a house of God, a house of mercy and compassion. The Police should investigate that man. I was angry when I heard the news of that

gory nature being perpetrated by a pastor. He should be investigated and jailed. He must have killed many people. A pastor should care for the less privileged, the down-trodden and those who don’t have people to assist them as well as those who don’t have the power to change their situation.

Jesus has told us that during the last day, he would separate his people from the evil ones who would be cast into unquenchable fire. That man who you refer to as a pastor is from the pit of hell, doing the will of the devil his master. I want him prosecuted and jailed to stand as deterrent to other ritualists who hide under religion to perpetrate evil. He is a devil incarnate. I am beginning to ask whether such a pastor has worshippers in his church. I think the police should extend their dragnet to his subordinates and elders in the church.”

His deputies are also guilty of the offence. I think that place must be an occultic sect” -The Sun