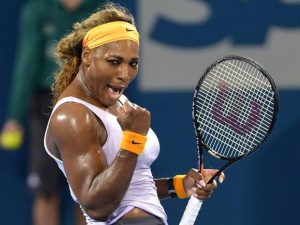 Serena Williams cruised to her 300th career victory at a grand slam to secure a place in the fourth round of Wimbledon Sunday.

The World No.1 and defending champion crushed Germany’s Annika Beck 6-3 6-0 to move into second place in the all-time list — just six wins behind Martina Navratilova’s Open era record of 306.

Williams, who will play Russia’s Svetlana Kuznetsova in the next round, has won 82 matches at Wimbledon and is vying not only for her seventh Wimbledon triumph but also a 22nd grand slam which would take her level with Open era record holder Steffi Graf.