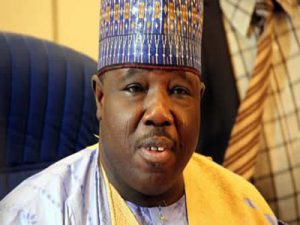 The deputy national chairman of the Ali Sheriff-led faction of the Peoples Democratic Party, PDP, Cairo Ojougboh, has said they are ready to end the crisis bedeviling the party.

Addressing journalists in Abuja on Friday, Mr. Ojuogboh said the faction is ready to end the crisis on the condition that Mr. Sheriff is allowed to hold a fresh national convention and handover the party’s leadership to a democratically-elected national chairman.

“As far as I am concerned, Ali Modu Sheriff is ready to step down but he does not want to be disgraced,” he said.

Mr. Ojuogboh said the former Borno governor must be given the opportunity to sit at a convention where he will hand over the affairs of the party properly.

“This is what we have told the governors, what is fair is fair.

“Ali Modu Sheriff did not say that he wants to continue to be chairman but what he said, is look, I want to handover to a democratically-elected chairman of the party that is elected by the people and not appointed. As far as the law is concerned, Sheriff is still the PDP Chairman today but he is ready to convene a convention to handover,” he said.

He also said the crisis in the party was about the 2019 presidential ticket.

He said some leaders of the party who are nursing presidential and vice presidential ambition have turned against Mr. Sheriff and that they are the ones fueling the crisis rocking the party.

The PDP is currently factionalized with a former governor of Kaduna state, Ahmed Makarfi, heading the other faction.

Mr. Makarfi was appointed by the National Convention of the party which held on May 21 in Port Harcourt, Rivers state.

Mr. Ojuogboh said some leaders of the PDP, especially some of the governors, moved against Mr. Sheriff at the Port Harcourt convention because they were afraid that he may not support their choice of the presidential candidate of the party in 2019.

“They are fronting for certain politician from the North to become the presidential candidate of the PDP in 2019 and they felt that Sheriff will not support his ambition and they started pushing for his removal.

“In fact, let me tell you where the problem started, it started in Jigawa after the three million people came out to welcome Sheriff. Thereafter, they started insinuated that Sheriff wants to be presidential candidate of the party.

Meanwhile, the Ahmed Makarfi faction has said that an ex-parte order by a Federal High Court, Abuja, restricting INEC from accepting candidates presented by the PDP in the forthcoming elections in Edo and Ondo state, is of no effect.

The purported order says PDP can only feature candidates after resolving its current crisis.

The Makarfi faction, in a statement by its spokesperson, Adedayo Adeyeye, said it believed that the order given by Justice Abang “was granted in error by his Lordship due to misrepresentation of facts by Senator Ali Modu Sheriff and his co-travelers”.

Mr. Adedayo said there were two court judgments on Tuesday, June 29, in Suit N0: FCT/HC/CV/1867/2016, nullifying the 2014 amendments to the party constitution alleged to have been used for the ratification of Ahmadu Muazu as chairman.

He said the judgment is in effect setting aside the appointment of Mr. Sheriff who was appointed to complete the tenure of Mr. Muazu, and the second High Court Judgment that vacated Sheriff’s Suit is to the effect that he (Sheriff is not supposed to be Chairman of the PDP in the first place.

“Nigerians and our teeming supporters will recall that the last Court ruling that vacated Senator Sheriff’s Suit on Thursday, June 30, 2016 even described him as a ‘busy body’ in the Judgment. How can the Court then grant an Ex-Parte Order to a busy-body who has no locus in the Party affairs”? Mr. Adeyeye said. -Premium Times