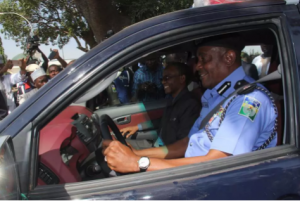 Ibrahim Idris, acting inspector-general of police (IGP), has alleged that Solomon Arase, his predecessor, went away with 24 police vehicles – including an armoured BMW 7 series, while he inherited an old car.

Speaking with reporters in Abuja on Sunday, Idris said the seven deputy inspectors-general of police (DIGs), who retired with Arase, also took away between seven and eight cars each.

Idris disclosed that he had assigned an investigative team to look into the records of police vehicles for the last three years.

“A week before I was announced IG, when you look through my office window, you could see so many cars. But the cars all disappeared when I came in,” he said.

“When I took over, there were no vehicles. I discovered that the last IG went away with 24 vehicles, including two BMWs. The DIGs some took seven, others eight. And they left me with an old vehicle.

“What I did in that was to assign a directive to the special investigative unit for them to investigate all vehicles’ purchases and donations to the police in the last three years as well as their positions.”

Idris said President Muhammadu Buhari has even noticed that he is using a less befitting vehicle.

He added that he has written to Arase, asking him to return the excess cars. He wondered why Arase decided to use all those cars in the first place.

“Even the one I follow the president with, the last time I went for an engagement, the president asked what I was doing with that kind of vehicle,” he said. -The Cable