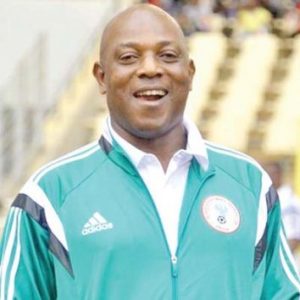 The children of the late former Super Eagles Coach, Stephen Keshi, have lamented the inability of the Federal Government to keep to its promises of giving their father a befitting burial.

Keshi (Jnr), who spoke on behalf of his siblings at the indoor Sports Hall of the Stephen Keshi international Stadium, Asaba, said it is disheartening that the federal government pulled out of the burial at the late hours.

They, however, commended Edo and Delta States for coming to their rescue.

The Deputy Governor of Delta State, Barr. Brutu Otuaro, who represented the Governor, Senator Ifeanyi Okowa, said Keshi lived a fulfilled life, having paid his dues in Nigeria and abroad.

The Speaker of the Delta State House of Assembly, Monday Igbiya and the member representing Aniochi/ Oshimili Federal Constituency in the House of Representatives, Hon. Amaechi Mrskpor, urged Nigerians to always honour efficiency which the late Keshi was known for.

Keshi’s body is currently lying in state at the palace of the Obi of Illah, before the interment.