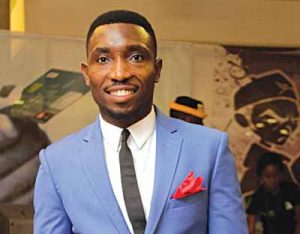 In a recent interview with Saturday Beats , the Reggae icon revealed that Timi Dakolo never took permission from him before he recorded a remix of his hit song, Send Down the Rain in 2013, adding that the Iyawo Mi crooner had exploited the fact that he was mentally unstable.

“He broke the rules of copyright. He is a thief because in music business, one must take permission before working on someone else’s song. That is why we have COSON,” he said.

He also slammed Dakolo, calling him a fake artiste for infringing on the laws of copyright.

“Dakolo never bothered to look for me before stealing my song. He is not an original artiste. It is only people like Tuface, Wizkid, Olamide that are original.”

In addition, Fashek admitted that he was hurt that he wasn’t even given credit for the song and further explained why.

“The song is not a normal song; it is a spiritual hit song. Timi Dakolo does not know how I suffered to get that song. I fasted for seven days before I got that song. I partook in three days ‘white’ fasting before the song came to me. Timi Dakolo did not go through that. I did not fight him because I do not have time. Let God judge us.”

Majek Fashek, has been stable since March after receiving treatment at an Abuja based rehab centre. He and his business consultant, Omenka Uzoma are now trying to fish out all those who took advantage of him.

Although Timi Dakolo initially declined to respond when contacted to get his own side of the story, the singer eventually took to Instagram to address the issue.

MY PEOPLE IT TRULY SADDENS ME TO SEE SUCH… I ALWAYS TRY TO DO THINGS RIGHTLY AND LAWFULLY… I PAID HIS MANAGER TO REMAKE THE SONG,I GOT MY INVOICE…I EVEN MENTIONED TO HIM DURING OUR REHEARSALS AT THE HEADIES.. SO HONESTLY I DONT UNDERSTAND THIS WRITE UP… OGA MAJEK FASHEK..I RESPECT AND LOVE YOU…YOUR VOICE GIVES LIFE TO LYRICS… YOU ARE ONE OF THE BEST MUSICIANS I KNOW..GOD BLESS YOU..